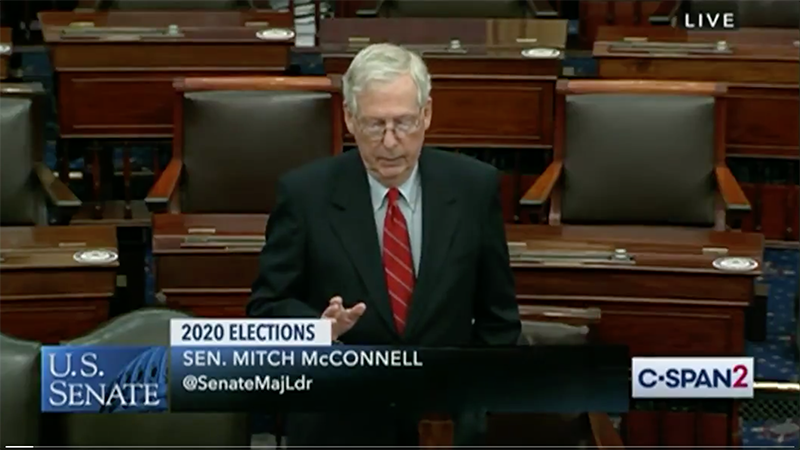 Republican Senate Majority Leader Mitch McConnell blasted Democrats and the leftist media Monday, saying that they have no right to ‘lecture’ on the topic of President Trump refusing to concede.

“Let’s have no lectures about how the President should immediately, cheerfully accept preliminary election results from the same characters who just spent four years refusing to accept the validity of the last election,” McConnell declared.

“And who insinuated this one would be illegitimate, too, if they lost again. Let’s have no lectures on this subject from that contingent,” McConnell added.

.@senatemajldr calls out the Democrats: "let's not have any lectures…from the same characters who just spent 4 years refusing to accept the validity of the last election”
pic.twitter.com/ntTmkmoeRK

“In late August, Secretary Hillary Clinton said, quote, ‘Joe Biden should not concede under any circumstances… I think this is going to drag out, and… he will win if we don’t give an inch,’” McConnell continued.

“That same month, Speaker Pelosi and the Democratic Leader both stated, quote, ‘[President Trump] needs to cheat to win.’ In October, when Speaker Pelosi was shopping some conspiracy theory about the Postal Service, she recklessly said, quote, ‘I have no doubt that the president… will lie, cheat, and steal, to win this election,’” McConnell further urged, exposing the sheer hypocrisy of Democrats.

“Does this sound like a chorus that has any credibility to say a few legal challenges from President Trump represent some kind of crisis?” the Senate majority leader questioned.

“At this time last week, small-business owners in cities across America were boarding up their windows in case President Trump appeared to win and far-left mobs decided to reprise their summertime rioting. Suffice to say a few legal inquiries from the President do not exactly spell the end of the Republic,” McConnell emphasised.

The lawsuit claims, “defendants, the very officials charged with ensuring the integrity of the election in Pennsylvania, have so mismanaged the election process that no one, not the voters and not President Trump’s campaign, can have any faith that their most sacred and basic rights under the United States Constitution are being protected.”

The suit also notes that the election was “shrouded in secrecy,” alleging that “Democratic-heavy counties violated the law by identifying mail-in ballots before Election Day that had defects and allowed the voter to fix it to ensure their vote counted.”

Other lawsuits have been filed in Pennsylvania, Arizona, Michigan, Georgia, Nevada, and Wisconsin.