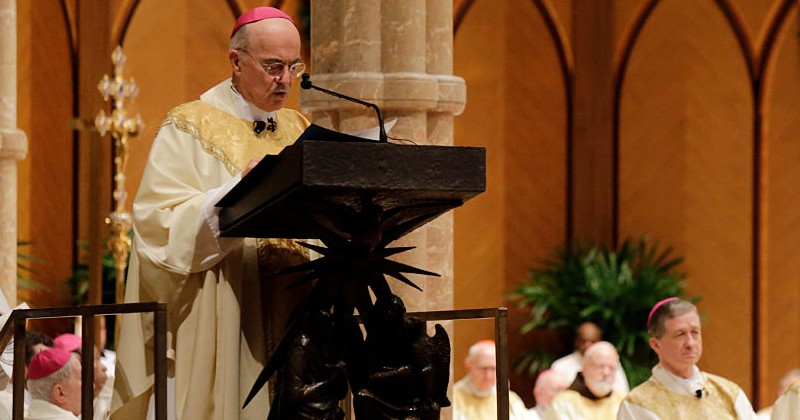 Archbishop Carlo Maria Viganò has written an open letter to President Donald Trump claiming that the COVID-19 pandemic is part of a plot to impose a “health dictatorship” and that Trump is “the final garrison” in stopping this agenda.

Viganò is a noted figure in the Catholic Church having served as the Apostolic Nuncio to the United States from October 2011 to April 2016. He was also instrumental in attempting to unmask cover-ups inside the Vatican regarding the sexual abuse scandal and financial corruption.

In his letter, the Archbishop asserts that the coronavirus pandemic is an integral part of spiritual warfare being waged between good and evil.

“We see heads of nations and religious leaders pandering to this suicide of Western culture and its Christian soul, while the fundamental rights of citizens and believers are denied in the name of a health emergency that is revealing itself more and more fully as instrumental to the establishment of an inhuman faceless tyranny,” he writes.

Viganò then outlines the full agenda behind “The Great Reset.”

“The purpose of the Great Reset is the imposition of a health dictatorship aiming at the imposition of liberticidal measures, hidden behind tempting promises of ensuring a universal income and cancelling individual debt. The price of these concessions from the International Monetary Fund will be the renunciation of private property and adherence to a program of vaccination against Covid-19 and Covid-21 promoted by Bill Gates with the collaboration of the main pharmaceutical groups. Beyond the enormous economic interests that motivate the promoters of the Great Reset, the imposition of the vaccination will be accompanied by the requirement of a health passport and a digital ID, with the consequent contact tracing of the population of the entire world. Those who do not accept these measures will be confined in detention camps or placed under house arrest, and all their assets will be confiscated.”

Viganò’s discussion of “The Great Reset” is not a conspiracy theory, it’s an openly stated goal embraced by World Economic Forum globalists like Klaus Schwab, who asserts in his new book, Covid-19: The Great Reset, that the world will never return to “normal.”

The Archbishop says “The Great Reset” will be activated “between the end of this year and the first trimester of 2021” and will be justified via more lockdowns in response to a second and third wave of the virus.

“No one, up until last February, would ever have thought that, in all of our cities, citizens would be arrested simply for wanting to walk down the street, to breathe, to want to keep their business open, to want to go to church on Sunday. Yet now it is happening all over the world,” writes Viganò, adding that the goal is to make “transition to the New World Order almost painless and unnoticed.”

Viganò spares no sympathy for Pope Francis, who he accuses of aiding this agenda “in order to defend and promote the globalist ideology, supporting the agenda of the deep church, who chose him from its ranks.”

Calling President Trump “the final garrison against the world dictatorship,” the Archbishop dismisses the idea of Joe Biden impeding this agenda, noting that he is “blackmailable” and will be used to allow “illegitimate powers to interfere in both domestic politics as well as international balances” before being swiftly replaced.

The letter also sparks a defiant tone in noting that many people will resist “The Great Reset,” because they “do not obey like machines, because they are endowed with a soul and a heart, because they are tied together by a spiritual bond that draws its strength from above, from that God that our adversaries want to challenge.”

“This Great Reset is destined to fail because those who planned it do not understand that there are still people ready to take to the streets to defend their rights, to protect their loved ones, to give a future to their children and grandchildren,” writes the Archbishop.

“The leveling inhumanity of the globalist project will shatter miserably in the face of the firm and courageous opposition of the children of Light.”