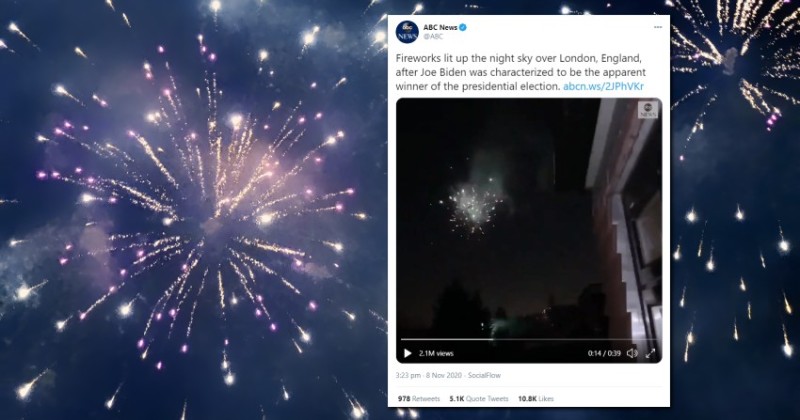 Bonfire Night, also known as Guy Fawkes Night, is an annual commemoration of public thanksgiving to celebrate the failure of the Gunpowder Plot and has been observed since the Observance of 5th November Act, which was passed by Parliament in 1606.

When the 5th of November falls just before a weekend, this year it was on a Thursday, it is common for the celebration to be spread throughout the weekend and for people to set off fireworks on Friday, Saturday and Sunday.

Apparently, numerous news networks didn’t know this and instead published fake news that the fireworks were in response to Biden beating Trump.

“Fireworks lit up the sky over London, England, after Joe Biden was characterized to be the apparent winner of the presidential election,” reported ABC News.

After numerous people corrected the false report in the thread, the network deleted the tweet.

“WATCH: Fireworks in London, Edinburgh as Biden win celebrated abroad,” tweeted the Hill, a tweet which has not been deleted.

The false reports were part of an effort to legitimize Biden’s presidency, despite the fact it is still being legally contested by the Trump campaign, by claiming that the world was celebrating Biden’s ‘victory’ in different ways.

CNN also erroneously reported that a church in Paris was ringing its bells to hail Biden’s victory, leading the church itself to issue a statement saying that the bell ringing was routine and had nothing to do with Biden.

CNN & other networks trying to boost Biden's legitimacy by claiming fireworks in London and church bells in Paris were celebrating a Biden win.

It's Bonfire Night weekend in the UK & the church in Paris released a statement saying the bells had nothing to do with Biden. pic.twitter.com/Sg4PfSjV1e

The official statement by the diocese of Nanterre on the subject. https://t.co/pEYSpPdQ7v

Numerous other individuals on Twitter also wrongly claimed the fireworks were in homage to Biden.

Fireworks in London. This isn’t a US celebration, it’s a worldwide one. Let the healing begin.

Fireworks for #bidenharis2020 here in SW London. We’re celebrating with you, America. It’s a much longer for win for us, too. pic.twitter.com/2UiPW5Ftyq

Even here in the UK my neighbours are setting of fireworks and shouting in celebration of Biden’s win pic.twitter.com/5GVv3HokHe

I’m not sure what Edinburgh is celebrating, but I’m claiming it’s for Biden and Harris! 🥳 #bidenharis2020 pic.twitter.com/Baovybu4XN

The Truth About the Presidential Election