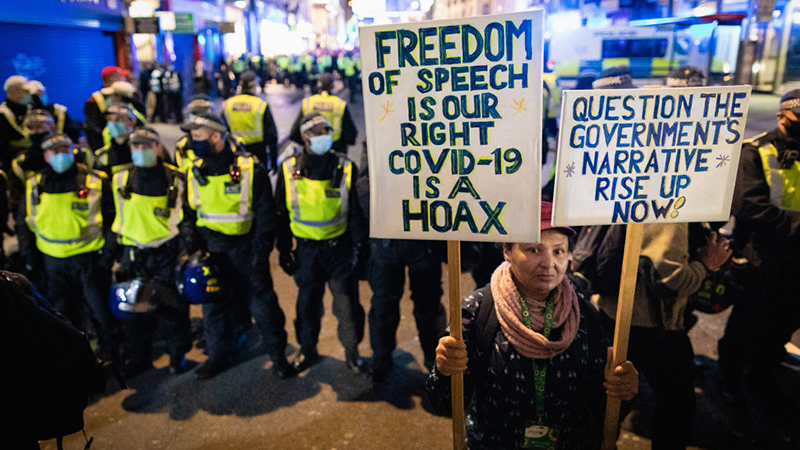 With the entire population of Britain now under de-facto house arrest as of Thursday, the move to a full on police state has edged closer with the announcement that protests are now banned.

The Times of London reports that a ban on demonstrations of more than two people will be made illegal under the second national lockdown.

Ironically, the move seems to be a response to the fact that Black Lives Matter were allowed to hold huge protests during the first lockdown, while families were not allowed to gather together in small numbers.

So now, any form of protest is apparently banned under the emergency measures.

The vagueness surrounding the overturning of a fundamental human right is chilling, with a A Home Office spokeswoman telling reporters that “the right to peaceful protest is one of the cornerstones of our democracy,” but adding “any gathering risks spreading the disease, leading to more deaths, so it is vital we all play our part in controlling the virus.”

“People must follow the rules on meeting with others, which apply to all gatherings and therefore protests too,” the government spokesperson added.

While police have been told by the government that they will have to break up protests, some officers have expressed a concern that the move will only embolden people to take to the streets.

A police source told The Times that “this is going to cause a lot of trouble.”

“People are going to be extremely angry and there are concerns they’ll protest the fact they can’t protest,” the source added.

In “Brave New World” Epsilons were the lowest class of workers, but in order to make sure they’re happy serving in this role, they are deprived of oxygen but pumped with hormones that make them physically strong but unintelligent. Further, they’re conditioned to feel that they’re privileged to be strong. Change hormones to authority and you have 2020 workers who are self-appointed hall-monitors for lockdown.

The move adds to the already growing litany of disturbing emergency “laws” that have been brought in under the guise of battling the pandemic.

Anyone attempting to leave the country ‘without reasonable excuse’ will now be fined up to £6,400.

Previously, people, including families, were not allowed to gather in numbers of more than six, now that number has been decreased to just two.

Shops in some areas have been told to only sell items they deem to be essential, which led to some, particularly in Wales which is run by a leftist Labour government, cordoning off entire sections, including those containing books and writing materials, and even clothes and bedding.

It has also been reported that police are quizzing people on what they are about to purchase before they enter grocery stores.

Meanwhile, people are reporting disturbing stories of being hounded by police for refusing to download the NHS coronavirus ‘track and trace’ app.

On Thursday, one NHS nurse publicly resigned while wearing her uniform before releasing the real numbers of COVID patients in her hospital, which is vastly fewer than the government has suggested, and denouncing the government’s disastrous lockdown policy.