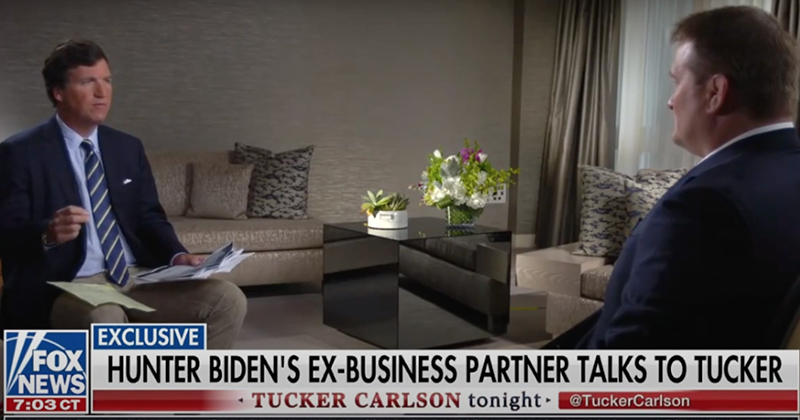 Hunter Biden’s former business partner says that he has employed a former Navy Seal team to protect him and his family as he continues to reveal details regarding the Bidens’ dodgy foreign business dealings, which he claims Joe Biden was intimately involved with.

Appearing in an exclusive interview with Tucker Carlson Tuesday, Tony Bobulinski noted that he is not at home right now, and that he has called upon his fellow former seal buddies to ensure he and his family remain safe.

Tony Bobulinski: “I have a former Seal Team protecting my family… I’m not at home right now.” pic.twitter.com/BoAC5xFxC6

The former Navy veteran spoke of multiple dealings made by the Bidens, including purchasing a portion of a Russian state-owned energy company.

Tony Bobulinski: "I didn’t request to meet Joe. They requested that I meet with Joe … They were putting their entire family legacy on the line. They knew exactly what they were doing. They were dealing with a Chinese-owned enterprise."pic.twitter.com/hXDqQl76Ui

Text messages obtained by @FDRLST show Hunter Biden personally arranging a meeting with his business partners and Joe Biden to discuss a major deal with CEFC, a Chinese energy company. The meeting occurred at the Beverly Hilton in L.A. in early May. Texts are from May 2, 2017. pic.twitter.com/nrSZC9vrtf

Bobulinski claimed that he attempted to ensure that the dealings were above board, but was told that everything was being structured with “plausible deniability” for Joe Biden:

This is maybe THE clip from this interview.

Bobulinski to #Tucker: "I remember looking at Jim Biden in saying how are you guys getting away with this? Like, aren't you concerned? And he looked at me and he laughed a little bit and said. 'plausible deniability.'" pic.twitter.com/GMDL1JNZtB

Tony Bobulinski: I asked James Biden point blank at the Peninsula Hotel about how they were structuring all these deals and getting away with it without putting Joe Biden’s career at risk.

Tony Bobulinski: Joe Biden gave “an emphatic no” to “putting proper governance in place” for business with Hunterhttps://t.co/GoF5zaTock pic.twitter.com/FuyIi6bTZf

Bobulinski also charged that Joe Biden is ‘blatantly lying’ when he says that he has no knowledge of Hunter Biden’s deals:

Tony Bobulinski on Tucker says it is a "blatant lie" when Joe Biden says he had no knowledge of his son's business dealings:

"There was no other reason for me to be in that bar meeting Joe Biden then to discuss what I was doing with his family's name and the Chinese." pic.twitter.com/famy4WaxOk

Bobulinski also repeated comments he previously made, noting that when he first threatened to go public, after Democrats began claiming that the entire situation was a manufactured ‘Russian disinformation’ smear campaign, Biden operatives begged him to keep quiet urging “You’re just gonna bury all of us.”

In Tucker Carlson's interview with Hunter Biden's ex-business partner Tony Bobulinski, they play a tape of Rob Walker, a self-described Biden family representative, telling him "you're just gonna bury all of us" if he went through with his plan to go public on business dealings pic.twitter.com/zbfvaXtw13

Democrats and corporate media accused Trump of being compromised by Russia.

Bobulinski says that Biden is now completely compromised when it comes to foreign negotiation:

TUCKER: If Biden is elected, how does this constrain his ability to deal with China?

BOBULINSKI: I think Joe Biden and the Biden family are compromised. I've held a [security] clearance … I just don't see, given the history here, how Joe can't be influenced. pic.twitter.com/2moTCX87yY

The important thing to take into account regarding Bobulinski is that he is a registered Democrat who has donated to Democrats for a long time. He says he only turned on the Bidens when it became obvious to him that there was wrongdoing.

Watch the entire interview below:

Biden Uses Images Of Hitler And Nazis In Campaign Ad