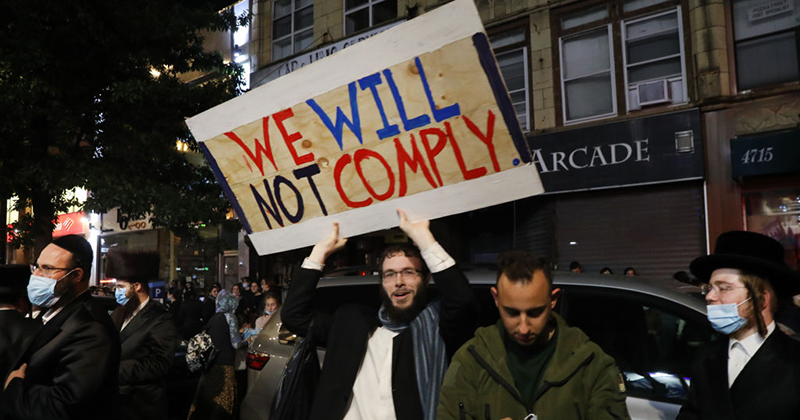 City Hall boasted about the figures on its Twitter account, noting that even churches were slapped with financial punishments:

From Friday to now, over $150,000 in fines from 62 summonses were handed out by City agents in the Red, Orange and Yellow zones, including 5 to non-compliant religious congregations.

Those who received the fines were not adhering to rules regarding gatherings, the mask mandate and social distancing requirements, according to the City.

The New York Times reports that the houses of worship could face fines of up to $15,000, according to Sheriff Joseph Fucito.

Last week, hundreds of Orthodox Jews protested against the lockdown measures, prompting scuffles with police. A number of Trump flags could be seen flying over the heads of the crowd during the march:

NEW YORK: Orthodox Jews burn a pile of masks in protest against the continued lockdowns in the city

Under the new rules, houses of worship located in red zones are limited to 25% capacity, or a maximum of 10 people.

Governor Andrew Cuomo said “I understand the desire to hold large religious ceremonies. I understand how important it is to their culture and to their religion… I also understand that it, as a matter of fact, jeopardizes human life.”

Cuomo urged Jewish leaders to get the word out and make people stay away from synagogues, while also accusing President Trump of inciting Orthodox Jews against him.

Lawsuits were brought against the City in federal court by both the Orthodox Jewish community and the Catholic Diocese of Brooklyn, challenging the constitutionality of the new lockdown rules.

They were both shut down, however, and the governor’s orders were allowed to proceed.

Bizarre ‘Socially Distanced Prom’ Shows Teens Dancing Back to Back