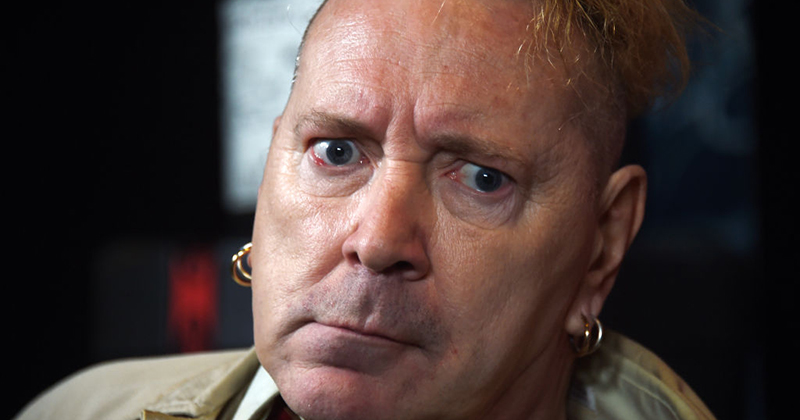 Sex Pistols and P.I.L. frontman John Lydon, aka Johnny Rotten, confirmed he will vote for President Trump’s reelection in November, reasoning that he does not ‘want a politician running the world’, and angering leftists in the process.

While Lydon is British, he also has US citizenship, meaning he is eligible to vote next month.

The ‘Pretty Vacant’ singer told the BBC he’s “definitely” voting for Trump, noting “He’s an individual thinker, I’ll give him that for a start.”

“He’s not the most lovable fellow on God’s earth, but I cannot see the opposition as offering me anything by way of a solution,” Lydon added.

In a further interview with The Guardian, Lydon said “I’d be daft as a brush not to,” vote for Trump, claiming that the President “really is making the country a bit better,” and adding that “He’s the only sensible choice now that Biden is up – he’s incapable of being the man at the helm.”

“Joe Biden is, in all practicality, senile, and delinquently senile. My wife has Alzheimer’s — I know the symptoms,” Lydon said in the BBC interview.

When the BBC host countered Lydon and suggested there is no evidence that Biden is senile, Lydon responded “Oh, really? Have you seen him talk lately? I can only go on my vast experience, seeing as my wife is suffering from Alzheimer’s.”

Lydon expanded on his reasoning for supporting Trump, noting that he identified with Trump constantly being accused of racism on a whim.

“I’ve been accused of the very same thing, so I’m offended for anybody who’s called that,” Lydon said.

He also commented on the death of George Floyd, noting “There’s not anyone I know anywhere that wouldn’t say that wasn’t ghastly… It doesn’t mean all police are nasty or all white folk are racist. Because all lives matter.”

Lydon also spoke about the COVID lockdown, noting “I don’t think lockdown is doing any good for anybody.”

“Wrecking an economy is not the smartest move to cure any illness or virus or disease. We’re all capable of wearing masks. We’re all smart enough not to want to give each other filthy, horrible viruses. Give people the chance to work. Don’t just close everything down. This is not Stalin at work here. But, I swear, the governments are beginning to feel that way. We have to hold ourselves responsible at some point in order for our society to exist at all,” Lydon added.

“It seems to me that what the Democrats here in America are promising will be tax hikes beyond belief, more lockdowns, more confusion, more bureaucracy and less answers,” Lydon urged, adding “I have seen what Democrats have done to California. They have destroyed this place.”

Lydon previously expressed support for Trump in 2016, after the election, noting “What I dislike is the left-wing media in America are trying to smear the bloke as a racist and that’s completely not true.”

“He’s a total cat amongst the pigeons … [He’s] got everybody now involving themselves in a political way. And I’ve been struggling for years to get people to wake up and do that,” Lydon added, after admitting he had not voted for Trump at the time.

Johnny Rotten backs Brexit & Trump: "The working class have spoken, and I stand with them!"

Conservatism is the new counter-culture! 🤗 pic.twitter.com/AUykvMY35s

The punk rocker has since been photographed wearing the iconic ‘Make America Great Again’ apparel:

Johnny Rotten does Not give a Fuck! 🙂 pic.twitter.com/Lxs91bN9ij

All of this is simply too much to handle for leftists:

This is the less punk thing ever.

Someone check his DNA. They could be brothers. That shade of orange couldn't have come from just any ordinary empathetic, rational, selfless, truthful, monogamous, faithful human being.

Well, he had a record called “The Great Rock n Roll Swindle.” Birds of a feather.

we're talking about the band that was formed to promote a clothing store right? yeah it doesn't surprise me at all

Yeah…turns out he's a big turd. Too bad, I loved PIL. But then I also loved the Smiths and look at Morrissey. Yuck.

Johnny Rotten living up to his fuckin' name.

So many big names in punk are Trump supporters.

Tragic how many of them were actual skinheads all along.

John Lydon's pro-Brexit, pro-Trump politics really shouldn't surprise anyone. You were always either more of a Joe Strummer or a Johnny Rotten – the distinction should never have been rocket science within the punk community, there was a right side and a Right Wing side.

not sure how he is a poser it's pretty punk rock to go against the mainstream agenda and boo fucking woo someone has a different opinion then someone else.