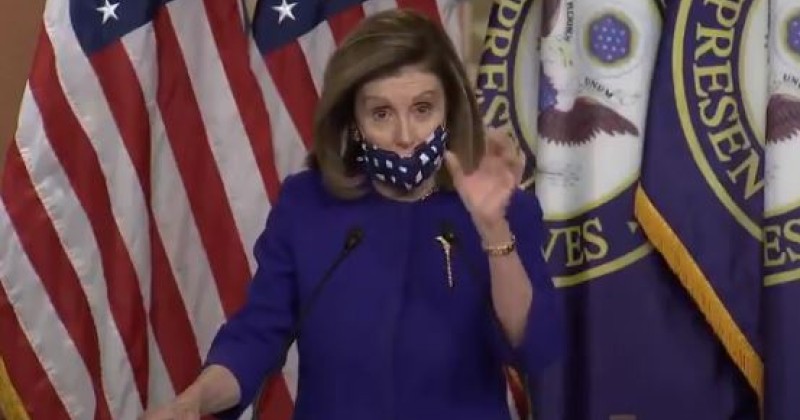 During a speech about what should happen in the aftermath of President Trump being infected with COVID, Speaker of the House Nancy Pelosi improperly wore a face mask, failing to cover her nose with the mask.

During the speech, Pelosi announced legislation that would create a commission to give Congress the power to oust a president from office under the 25th amendment.

This followed Pelosi repeatedly questioning whether Trump had really recovered from his coronavirus infection and accusing him of being “in an altered state.”

However, Pelosi’s own concern for those around her didn’t appear to be too significant as she wore her face mask improperly during part of the presentation, with it hanging well below her nose.

Pelosi: ‘This is not about Pres. Trump. He will face the judgment of the voters. But he shows the need to create a process for future presidents … a president’s fitness for office must be determined by science and facts’ pic.twitter.com/H216enTxQX

Twitter respondents were quick to notice the faux pas.

“She knows her mask should be covering her nose too, right?” asked one.

“Either wear the mask properly, get one that fits, or take it off,” added another.

This is by no means the first time Pelosi’s mask hypocrisy has been exposed.

Last month, video footage emerged of Pelosi’s visit to a hair salon in San Francisco, during which she broke rules that only allow service outdoors and wore a face mask around her neck rather than her mouth.

A spokesman for Pelosi said the Speaker was unaware she was breaking city rules, while President Trump said Pelosi had been “decimated” having lectured everyone else about wearing face masks and abiding by COVID-19 restrictions.

9/1/20: High-risk age Cali Democrat Nancy Pelosi at age 80 yrs old, was seen without wearing a mask just weeks ago inside a San Francisco hair salon as she continues to scold and lecture America into the need to wear one. pic.twitter.com/clRisg4MFS

BBC Journalist Blasted For Chasing Non-Mask Wearer Down the Street