“47 years plus he was a cheerleader for NAFTA, the worst trade deal ever made” 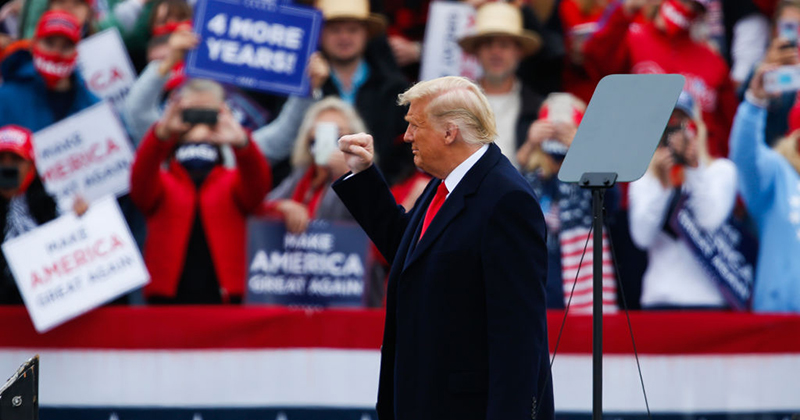 Appearing before a huge crowd in Pennsylvania Monday night, President Trump described his opponent Joe Biden as a “diehard globalist” who will kill the US economy.

“Joe Biden is a diehard globalist who wiped out your steel mills, closed down your factories, killed your coal jobs, outsourced your industries, and supported every horrible terrible ridiculous trade deal for over a half a century,” Trump told the crowd of thousands.

“Think of it, 47 years plus he was a cheerleader for NAFTA, the worst trade deal ever made, and I ended it,” Trump added.

“Remember I used to say, we’re going to end and everyone smiled, they said hey look give it a shot, I got it then nobody thought I could get that thing done,” the President continued.

“USMCA just kicked in and it’s incredible for our country less for their countries but that’s okay,” Trump boomed.

Trump added that Biden “enthusiastically voted for China’s entry into the world trade organization,” noting  “that was the beginning of the China rise, that was a disaster. They were flatlined for years and years and then bump.  Thank you very much Joe, I appreciate it,” Trump stated.

“Joe and others,  decimating your manufacturing and enriching China at your expense, you know that,” the President urged.

Elsewhere during the rally, Trump warned that Biden will prolong the pandemic if he manages to get elected:

Trump urged that Pennsylvania and other hard working cities need to be open, and that will not happen under Biden:

Trump warned that Biden is committed to killing off jobs in the city:

The president seemed confident that wouldn’t be an issue, however, reading out his own poll numbers and declaring that it was “looking good,”:

Trump noted how Biden can’t even remember who he’s running against:

Referring to Biden putting a “lid” on events, Trump declared that Biden should be ashamed of himself for not campaigning hard enough:

During a second event in Martinsburg later in the evening (Trump held THREE rallies yesterday), Trump noted that Biden “doesn’t do these kinds of rallies because no one shows up”:

Nearby, Biden did briefly emerge from his basement, and proved Trump exactly correct, as only 20 people showed up to a field he was standing in:

After officially calling a “lid” on in-person campaigns events, Joe Biden met with a tiny gaggle of supporters in Pennsylvania just 20 minutes from his home.https://t.co/tuKjgofdpG

“Look for someone with a corpse like appearance, exhibits aggressive behaviour, craves human flesh, and utters incoherent moans and groans” 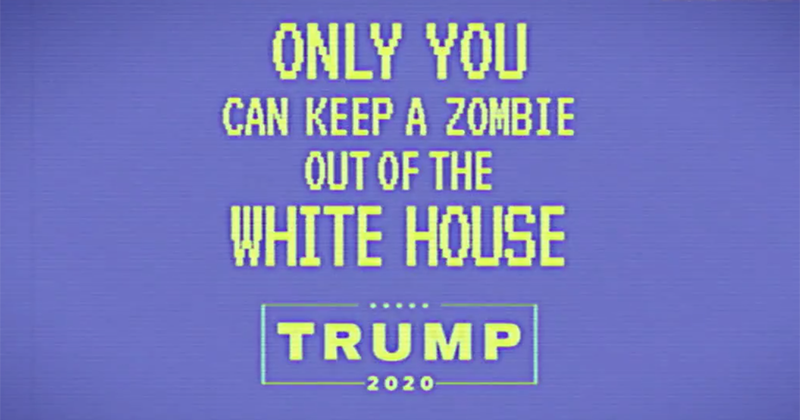 Viewers of Fear The Walking Dead On AMC were treated to a Trump campaign ad Sunday notifying them of how to prevent ‘a zombie’ entering the White House.

The ad featured several clips of Biden acting weirdly, with a voice over notifying viewers of the traits exhibited by the walking dead.

“Look for someone with a corpse like appearance, exhibits aggressive behaviour, craves human flesh, and utters incoherent moans and groans,” the voice over noted while footage of Biden doing all the above played in the background.

“With your help we can prevent the zombie uprising,” the short ad concluded.

Only YOU can keep a zombie out of the White House! pic.twitter.com/9zC3so9Z3O

Given that Biden’s endless stumbling around and brain failure, including the fact that he can’t remember who he is running against, it was a shrewd move on behalf of the Trump War Room.

@realDonaldTrump
I just saw your commercial on @AMC comparing Biden to a Zombie during Fear The Walking Dead.

OMG! Did everybody just see that Trump commercial? Comparing Joe Biden to the zombie apocalypse?

You aren't living if you haven't seen the Biden Zombie commercial. I needed that laugh.

OMG! Just saw a Trump/Pence campaign ad on AMC during Fear the Walking Dead & it showed shufflin sniffin Biden while talkin about Zombies & how votin for Trump will defeat them….It wuz AWESOME!!!! 😜😎💥 #Trump2020

The Trump ad during Fear The Walking Dead tonight referencing Biden as a Zombie was pee your pants funny.

Countdown to Democrats trying to cancel AMC starts in 3,2,1…

Leftists, didn’t get the humour:

Trump team thinks their Biden is a zombie commercial is clever but it is about the dumbest damn thing I've ever seen.

Watching Fear the Walking Dead. Commercial comes on claiming Joe Biden is like a zombie. This from the Trump campaign. Fucking unbelievable! The president of the US has a campaign ad that looked like a B movie! What a disgrace he is!

Dear god now Donald Trump is advertising on AMC with an anti-Biden ad saying "with your help we can prevent a zombie uprising".. WE HAVE A JACKASS IN THE OVAL OFFICE!

This feels desperate even for trumpworld https://t.co/RiuSk0MEdO

The NETWORKS need to call the election for Biden ASAP.