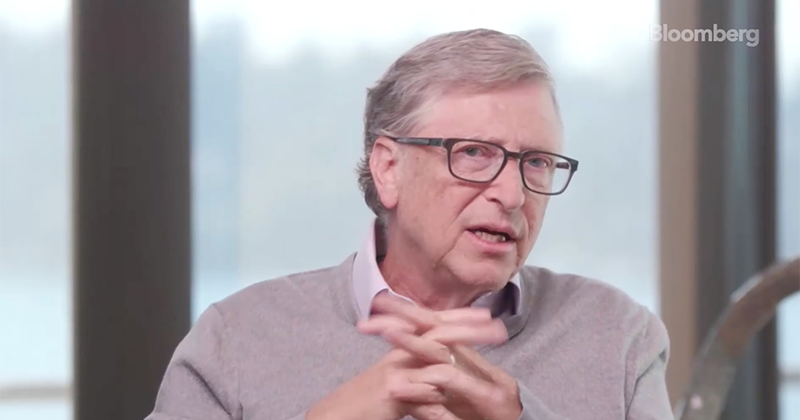 In an appearance with Bloomberg Tuesday, Bill Gates once again dismissed anyone who questions the motives of his global coronavirus vaccination push as a ‘conspiracy theorist,’ calling them “so crazy”.

Host Erik Schatzker stated that “The conspiracy theorists who believe that you helped to create and spread the Corona virus might be easy to dismiss. If there weren’t so many of them,” before asking “has that notoriety become an impediment to your efforts or the foundation’s work yet?”

“Well it’s so crazy to suggest the opposite which is you know we make vaccines and that has save millions of lives to somehow say that the vaccine in general is malign or that you know that the deaths are really taking place,” Gates stated.

“It’s surprising to me how interesting that is. It spreads far more quickly than the truth,” he added.

Gates attempted to conflate questions over vaccines to those who refuse to wear masks in public, stating “The big concern is that if that means that the protection of others like wearing masks or a willingness of enough people to take the vaccine then it absolutely does make things worse.”

“And the idea of how should these social media platforms try and avoid being the source. These sort of weirdly interesting falsehoods. That’s a debate or discussion we’re going to we’re going to have to continue to have,” Gates added.

It isn’t surprising however, that mistrust of Gates’ vaccines continues to spread, given accounts like a recent admission by the UN that a major international vaccine initiative is actually causing the outbreak of the very disease it was supposed to wipe-out.

In the same interview, Gates suggested that while it is ‘weird’ for people to mistrust his vaccines, Americans should not trust the FDA or the CDC, reasoning that they are linked to the President, and are politicising the virus.

“Any suggestion a politician helped create the vaccine, or it’s faster because a politician is a very dangerous thing,” Gates proclaimed, adding “We saw with the completely bungled plasma statements that when you start pressuring people to say optimistic things, they go completely off the rails. The FDA lost a lot of credibility there.”

“I think within the FDA there is a lot of professionals. Historically, just like the CDC was viewed as the best in the world, the FDA had that same reputation as a top-notch regulator. But there’s been some cracks with some of the things they’ve said at the commissioner level,” Gates further declared.

“The CDC has been largely written out of the picture because you have people at the White House who aren’t epidemiologists saying what a great job they have done, so it’s no longer a set of experts,” Gates bizarrely claimed.

He added, “These companies are very professional, and the benefits of the vaccine here are very dramatic. After all, not just on the health front, the economic front, the education front, we need to bring this pandemic to a close.”

The billionaire then admitted that he was thankful that he is able to operate above governmental structures, in an effort see that everyone on the planet is vaccinated.

“Thank goodness that we have this private-sector expertise that we want to shape into a global public good that gets to everybody on the planet,” Gates stated.

In a further media appearance with MSNBC, Gates said that ‘The Next Big Question’ is how to distribute his Covid vaccine globally.

In a further interview with STAT News, Gates described the US government’s coronavirus response as “shocking” and “among the worst in the world”.

“The administration’s now hired this Stanford guy who has no background at all just because he agrees with their crackpot theories,” Gates said of Dr. Scott Atlas, the president’s new coronavirus advisor.