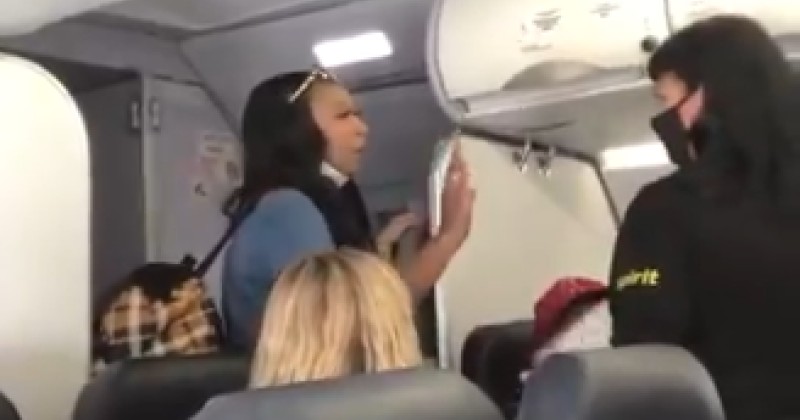 Video footage from inside the cabin of a plane shows an African-American woman belligerently refusing to let a flight attendant pass her in the aisle because of “white privilege”.

The clip begins with the flight attendant attempting to get past the black woman as the obnoxious passenger repeatedly expresses her demand to go to the bathroom before accusing the attendant of “getting aggressive with me.”

Another female passenger then gets involved in the argument as the black woman gets in her face and tells her, “Are you my boss? You are white privilege, you’re not my boss. Sit down,” (she is already sat down).

Won’t let anyone pass her in the aisle cause that would be ‘white privilege’. pic.twitter.com/je5BV3FJEG

The black woman then accuses the flight attendant of exercising her “white privilege” while still blocking her way.

The encounter is made all the more stupid by the fact that the black woman could at any time just turn around and enter the bathroom, but she is intent on being insufferable and having an argument.

“I need to get to my door,” repeats the flight attendant as the black woman continues to bicker.

“I’m a Queen, California, she was from a black queen,” says the woman before again arguing with the other passenger and accusing her of having “white privilege” and telling her to “shut up.”

“You need to understand, you don’t run America no more sweetheart,” she tells the blonde white woman before explaining how she once “slapped the shit” out of a “white bitch” for disrespecting her.

Despite the fact that the black woman is not wearing a mask and she is clearly acting aggressively and impeding flight staff, she was not removed from the plane.
That could be referred to as “black privilege”.

Professor on Antifa Execution of Trump Supporter in Portland: “He Killed a Fascist. I See Nothing Wrong With It”