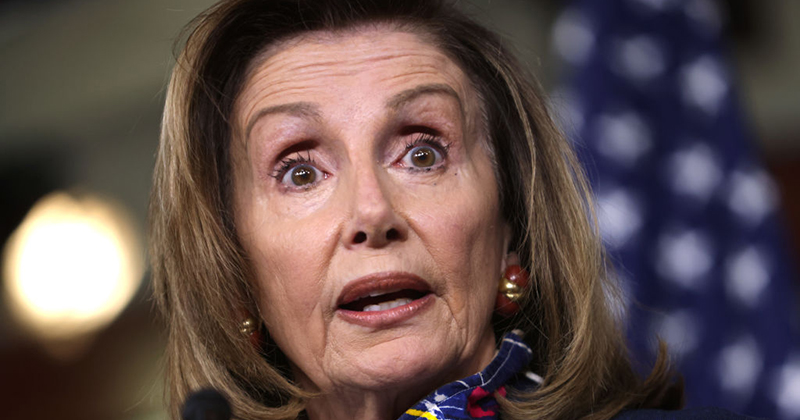 A petition to prosecute Nancy Pelosi for violating Covid-19 regulations by visiting a hair salon in San Fransisco has attracted thousands of signatures in just 24 hours.

At time of writing, the petition hosted at media action network has garnered close to 25,000 signatures.

Not only did Nancy Pelosi knowingly violate health ordinances, but just destroyed a business because she couldn’t take a ounce of responsibility.

The salon owner gets death threats, while Pelosi has paid ZERO price for her hypocrisy.

At a very minimum, Nancy Pelosi must be prosecuted by San Francisco for her flaunting of COVID regulations. Now!

The footage of Pelosi was leaked last week, showing her walking around the salon without a face mask. All the while ‘ordinary’ people are not even allowed to go to hair appointments because salons are still all closed in SF under coronavirus rules.

After several days, instead of apologising, Pelosi claimed that she had been “set up” by the owner of the salon.

“I take responsibility for trusting the word of the neighborhood salon that I’ve been to over the years many times, and when they said, ‘We’re able to accommodate people one person at a time.’ I trusted that,” Pelosi told reporters.

“So I take responsibility for falling for a setup. And that’s all I’m going to say on that,” Pelosi declared, even adding “I think that this salon owes me an apology, for setting me up.”

If ever there was a time for the old adage ‘one rule for them, another for everyone else’ it is now. Pelosi’s reaction also betrays how over privileged and out of touch Democrats have become.

Protesters have taken to decorating trees outside Pelosi’s home with curlers and blow dryers:

Protesters have gathered in front of Nancy Pelosi’s San Francisco home and are stringing up curlers and blow dryers on a tree after a video surfaced of Pelosi getting her hair done indoors/maskless at a SF salon @sfchronicle pic.twitter.com/v6KVORByaP

Meanwhile, the owner of the salon has been forced to shut down the business permanently.

“I am actually done in San Francisco and closing my doors, unfortunately,” Erica Kious announced Wednesday .

“I started to just get a ton of phone calls, text messages, emails, all my Yelp reviews… saying that they hope I go under and that I fail,” Kious explained, adding  “So just a lot of negativity towards my business.”

“I’m actually afraid to go back, just because of the messages and emails I’ve been getting,” she continued, explaining that “It’s a little scary and sad. I do have a lot of positive calls and text messages from clients, but other than that, nothing but negativity.”

Since the incident came to light, Pelosi has continued to hammer President Trump over the coronavirus response, claiming that he isn’t taking it seriously enough, and didn’t act quickly enough back in February and March.

The reality is that Trump was intent on closing the borders and pushing for travel bans, against the will of Democrats, at the end of January, while Pelosi and others were still encouraging mass gatherings well into February.

Pelosi then set about blocking coronavirus funding, while gorging on ice cream from inside her luxurious mansion.

Spain: Cop Kneels on 14-Year-Old Boy For Refusing to Wear a Mask