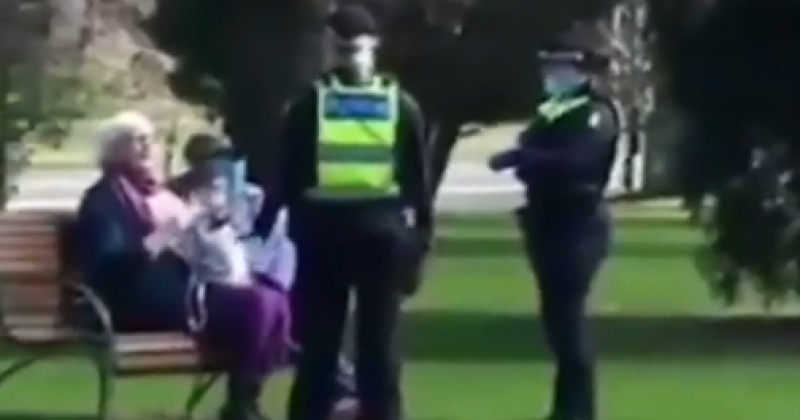 Yet another shock video out of Australia shows police enforcing coronavirus rules by arresting an elderly woman sitting on a park bench for not wearing a mask.

“This is unlawful, on what grounds am I under arrest?” asks the woman.

An officer then walks around the back of the bench and snatches her friend’s phone away, preventing her from filming the encounter.

The woman is told that she is being arrested for failing to provide her name and address.

Australian Police wanting to arrest 2 elderly women sitting in a park, watch as one of the Police officers grabs the women’s phone as she is recording. pic.twitter.com/w9mOqThiHk

However, as we have seen in numerous other instances, this is just part of the enforcement of coronavirus rules.

Once a person has been targeted for not wearing a mask or violating any other coronavirus rule, they are asked to provide a name and address so they can be fined.

If they refuse to do so, they are then arrested.

Another video we reported on shows a young woman being dragged to the ground and manhandled by a police officer for not wearing a mask.

Citizens of the state of Victoria in Australia have been subjected to one of the most draconian COVID-19 lockdowns in the developed world.

As we highlighted yesterday, a journalist was dragged to the ground and arrested merely for covering an anti-lockdown protest.

A pregnant woman was also arrested in front of her children in her own home for posting about an anti-lockdown protest on Facebook.

Authorities have also given themselves the power to have police remove children from the custody of their parents in order to ensure compliance with coronavirus rules.

Police claim they arrested me for not moving when the Police Commander asked me to.

Problem is, he NEVER asked me anything.

He just ordered the ARREST of a journalist because he doesn't like what I report.