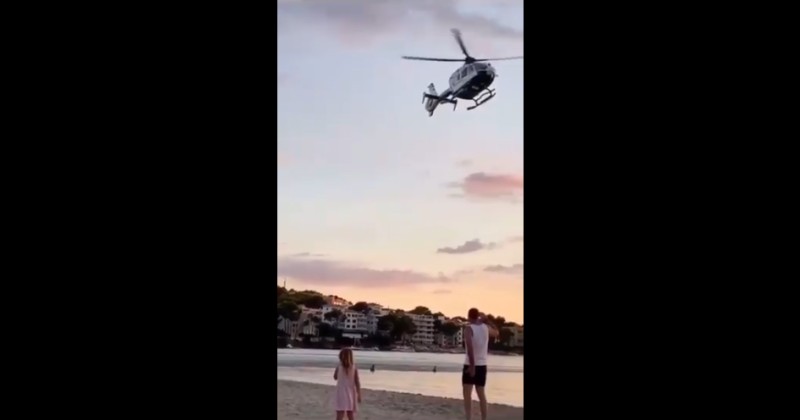 Video footage shows a Spanish police helicopter hovering low above a beach ordering families via a loudspeaker to leave due to coronavirus rules.

The chopper was patrolling the coastline on Palma Beach and Calvia Beach on Majorca, one of Spain’s Balearic Islands.

Respondents on social media expressed their fury at how police resources were being misappropriated.

“We are in the police and oppressive state without realizing it. Monitoring the population with helicopters instead of monitoring the drain of our borders or the real criminals. We are left with a precious dictatorship,” said one.

“Total state control. Extreme authoritarian govt machine turned against the people who it extracts resources from to fund the heli covid nazi regime,” added another.

Authorities brushed off the complaints without even addressing the substance of them.

“The diffusion of messages using megaphones from vehicles and helicopters at beaches and parks is being carried out daily,” said a statement by a Civil Guard spokesman.

“This is happening to make sure the new rules established by the Balearic Islands regional government regarding the new timetables, are adhered to.”

As we previously highlighted, some Spanish police officers also appear to enjoy beating people for not wearing their masks properly.

In Spain, it’s the law the wear a mask everywhere outside, including on many beaches.

If only Spain’s socialist government was as serious about patrolling beaches for COVID curfew violators as it was patrolling them for illegal boat migrants that arrive on a regular basis and often just run away and disappear into the population.

Sweden Close To Victory Over Coronavirus; Never Had A Lockdown Or Mask Mandate