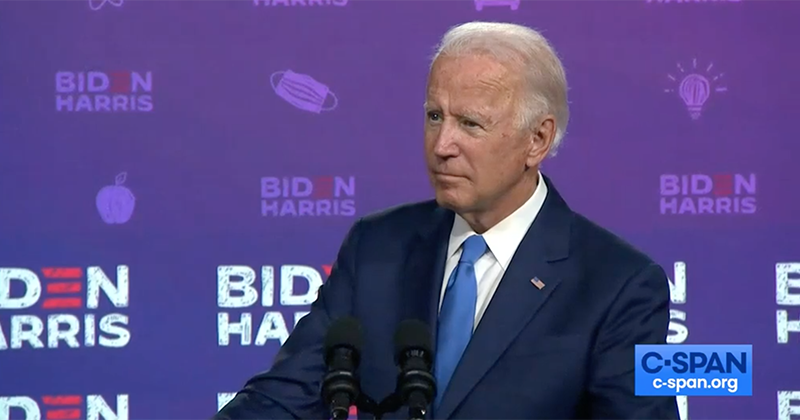 While answering reporters’ questions, which is a rarity in itself, Democratic nominee Joe Biden suggested Wednesday that the Trump supporter who was shot and killed in Portland at the weekend was “inciting responses”.

Aaron “Jay” Danielson was reportedly shot and killed after protesting had ceased in Portland Saturday, and was just walking along the street.

The suspect in the case, Michael Forest Reinoehl, is reportedly a supporter of Black Lives Matter and Antifa.

According to The Oregonian, one witness said it appeared to him that the shooting was unprovoked, and Danielson was “not agitating”.

In other words, there is no evidence that there was any ‘incitement’ that led to the shooting.

Biden, however, seems to see it differently:

“I think what happened in Portland, where a — one of the Trump guys riding along in vans, inciting responses, shooting rubber bullets, I guess, or paintballs, apparently there was someone shot by someone in the crowd, with a bullet. Killed. I think that person should meet the legal requirements, whatever that calls for, be investigated, and it should follow through on what needs to be done. Let the judicial system work. Let’s make sure justice is done,” Biden said.

Biden just said that Aaron “Jay” Danielson, the Trump supporter who was killed in Portland was there “inciting response”

Jay was walking on the street with a friend, targeted, and executed in cold blood by Antifa.

In Joe Biden’s America, his Antifa thugs don’t get charged and cops don’t get due process. https://t.co/bqefCYGSCi

It’s not all that surprising that Biden would make such a suggestion, given that he is leading the Democratic talking point that Trump and his supporters are the ones inciting violence in US cities.

The media is in lockstep, repeating the mantra that looting, rioting, and violence is part of “Trump’s America,” even as endless videos and reports emerge of leftists burning cities down and actively hunting down Trump supporters.

Trump himself accused the media of misreporting Danielson’s murder, failing completely to highlight how Antifa leftists celebrated his killing.

Trump hits hard at the FAKE NEWS for ignoring the MAGA assassination in Portland!

"You are doing a disservice to your country" pic.twitter.com/duLqgdCVjk

Study: Riots Have Hit 48 Out Of 50 Of Largest US Cities