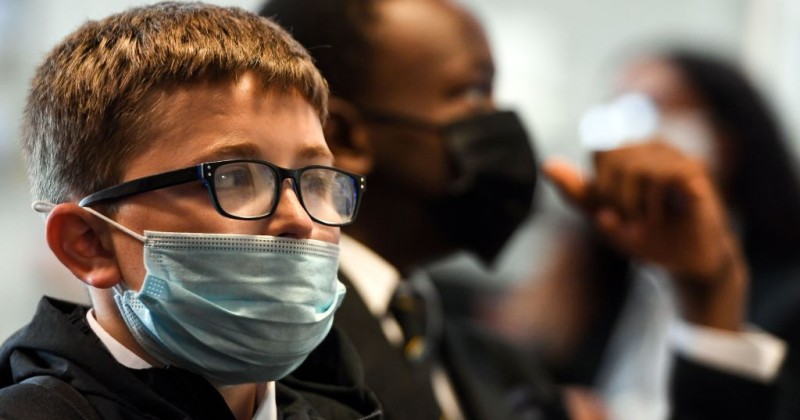 A school in the United Kingdom is excluding students for a week if they turn their heads in class or walk the wrong way around the classroom in another example of coronavirus hysteria.

A reader from Merseyside contacted LockdownSkeptics.org to relate the story;

My boys started back at school today. They’re usually quite robust and no nonsense but they came home in tears. They have to face the front all day. If they turn their heads it is a mandatory week exclusion. They must use the one way system (obviously) and if they are caught not doing so they are excluded. Three people excluded today because they forgot and turned the wrong way. They only get half an hour for lunch but they have to queue up in silence for 20 mins and when they get in they are moved off under the threat of exclusion and they have to be back in their rooms by the stroke of 30 mins or guess what happens? Exclusion. So no lunch. It’s the only break they get. Guess what happens if they talk in class, guess what happens if the slightest bit of uniform is wrong (even though we can only order from one supplier and they are running four weeks behind).

The parent adds that kids who don’t make it to school before 8:30am, as well as those seen outside school before 8:30am will also be excluded. This is made all the more absurd by the fact that only one bus has been provided for the whole school, so many children have to walk to school.

“All the teachers are completely encased in acrylic boxes at the front of the classroom and aren’t allowed to leave them while pupils are in the classroom,” adds the parent.

Meanwhile, at another boarding school in Hampshire that charges parents fees of £39,000 a year, all the pupils were sent home for 2 weeks after a single child turned up with a sore throat.

As we highlighted yesterday, another school has threatened to exclude pupils who joke about coronavirus.

In the meantime, COVID-19 deaths have completely flatlined but the media and the government continues to scaremonger about a “second wave” despite the fact that a rise in new cases is purely down to more testing.

Just six children under 18 have died in the UK with COVID-19 and all of them had a serious comorbidity.