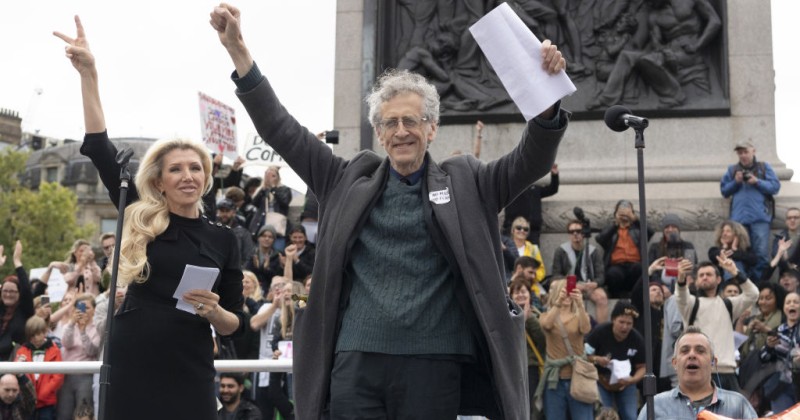 While the platform has prostrated itself for Black Lives Matter marches, GoFundMe shut down a campaign to help raise funds for the organizer of an anti-lockdown protest who was fined £10,000 pounds.

On Saturday, 73-year-old Piers Corbyn led a ‘Unite for Freedom’ march of around 400 people to Tragalgar Square in central London and was subsequently arrested by police.

He later revealed that he had been handed a £10,000 fixed penalty fine for organizing the demonstration.

In comparison, not a single Black Lives Matter protest organizer has been arrested or issued with a substantial fine over breaking coronavirus laws in the last three months, despite BLM demonstrations attracting thousands of people with little to no social distancing.

Indeed, on the very same day of the anti-lockdown protest, a ‘Million People March’ to protest against “systemic racism” in the UK also took place in London.

The organizers of that event were not hit with the same fine that Corbyn received.

Under UK law, holding a gathering of more than 30 people in an outdoor place is illegal.

Metropolitan Police Commander Bas Javid said officers had worked “tirelessly” to warn communities “that we remain in a health pandemic,” but this warning seemed to be strangely silent during weeks of large scale BLM rallies.

Despite Corbyn saying he would appeal the fine, a GoFundMe was set up to help him pay the costs was swiftly deleted within 48 hours.

This is the same platform that has repeatedly provided its services enabling Black Lives Matter activists to raise millions of dollars.

Police are also now conducting a “post investigation operation” of the anti-lockdown rally in order to help them identify “individuals contravening the regulations”.

One wonders how many such investigations are taking place into Black Lives Matter demonstrators who broke the very same law as Corbyn.

My guess would be zero.

CDC: COVID-19 “Only Cause Mentioned” in 6 Per Cent of Total Coronavirus Deaths