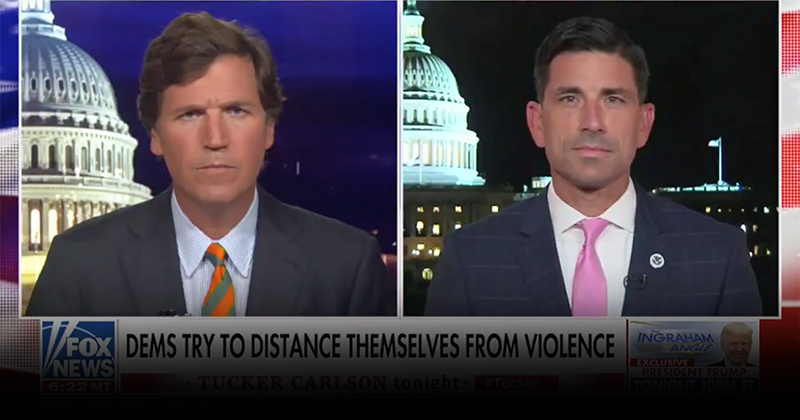 The acting head of the Department of Homeland Security declared Monday night that the Department of Justice is “targeting and investigating” the leaders of Black Lives Matter and Antifa over violence and rioting in US cities.

Appearing on Tucker Carlson’s show, Chad Wolf also claimed that the feds are going after those paying for the organisation of the rioting.

When asked by Carlson “Why haven’t we seen the leaders of Antifa and BLM arrested and charged with conspiracy under RICO?”, Wolf said he had spoken to the Attorney General personally about the matter.

“I know that they are working on it. Look, we have seen about 300 arrests across this country regarding civil unrest and protesting, violent protesting and I would say, criminal protesting,” Wolf said.

“I know the Department of Justice has charged about 74, 75 individuals there in Portland with different federal crimes,” Wolf continued.

“We will continue to see how those investigations are going. Department of Justice is also targeting and investigating the head of these organizations, the individuals that are paying for these individuals to move across the country,” he added.

Wolf also repeated information from police reports indicating that most people arrested for rioting in Kenosha, Wisconsin were from other cities.

“What we know, Tucker, is that we have seen groups and individuals move from Portland to other parts of the country,” Wolf said.

“We had about about 175 arrests in Kenosha, almost 100 of them were from out of state. So, we know they are moving around. We have seen them in D.C., in Sacramento, and elsewhere. They are organized. We have seen similar tactics being used from Portland and other cities across the country as well. So, we know that there is organization, I know the Department of Justice is also looking at that as well,” Wolf urged.

Amid the violence, videos have emerged of BLM and Antifa agitators in Kenosha and Oakland, California, marching and chanting ‘Death to America’:

This wasn’t widely reported. On Wednesday night, around 700 black bloc militants and their supporters rampaged through Oakland, Cal. They chanted “death to America” while starting fires and smashing cars and buildings. pic.twitter.com/A5512gCBzU

We were forced to chant “death to America” when I was at school in Tehran. Now, the Left chant it in America. https://t.co/1VydmICdLx

Wolf also noted that Joe Biden must be “delusional” for threatening that there will be more violence if Trump is re-elected.

President Trump is scheduled to visit Kenosha Tuesday, after ignoring a request from Wisconsin Gov. Tony Evers who said “I am concerned your presence will only hinder our healing.”

Biden Tells Voters Violence Will Continue Unless They Vote For Him