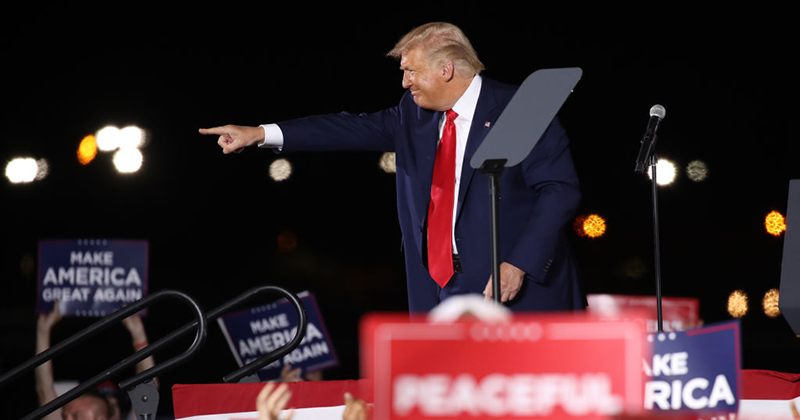 President Trump’s approval has risen significantly in the past week, and means he now has a significant lead nation-wide, according to a new Democracy Institute/Sunday Express Poll.

The survey indicates that Trump now has a three-point lead in the national popular vote, and has forged ahead to a seven-point lead in key battleground states.

Trump leads by 48% to Joe Biden’s 45% nationally, which equates to a one point jump since the beginning of the month.

The seven point lead Trump now commands in states such as Florida, Iowa, Michigan, Minnesota, Pennsylvania, and Wisconsin, according to the poll, is a two point bump on a month ago.

The poll was conducted on Friday August 29, the day after the RNC ended.

The poll also projects that Trump will score a higher electoral college margin over his opponent than in 2016, by winning in Minnesota and New Hampshire.

The poll numbers also indicate that Trump will win the electoral college vote in Wisconsin.

Biden and the Democrats’ belated addressing of the rioting, attempting to blame it on Trump, appears to have come too late, particularly in Wisconsin, where lifelong Democrats say they’re either not voting or voting for Trump.

Meanwhile, some Democrats, such as Willie Brown, are pleading with the party to stop legitimising looting and rioting, as it will help re-elect President Trump.

Biden charged Saturday that Trump is using the National Guard as a “prop or as a private militia to violate the rights of fellow citizens”: