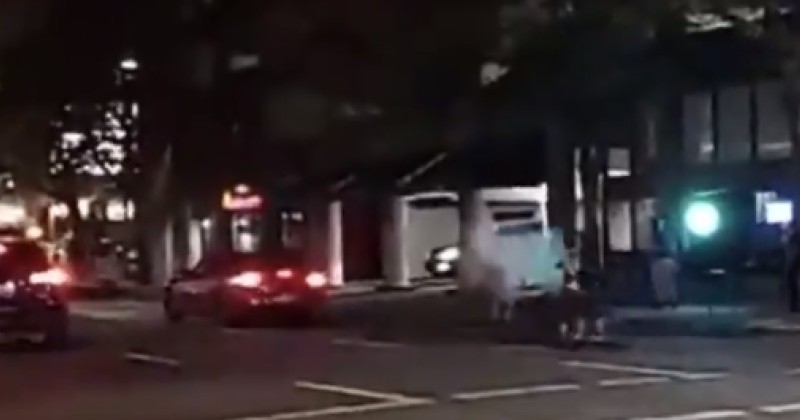 A member of the pro-Trump “Patriot Prayer” group was reportedly shot dead in the street during a pro-Trump rally in downtown Portland on Saturday night.

The shooter is at large.

From The New York Times, “Deadly Shooting in Portland After Pro-Trump Ralliers Clash With Protesters”:

A man was shot and killed Saturday as a large group of supporters of President Trump traveled in a caravan through downtown Portland, Ore., which has seen nightly protests for three consecutive months.

The pro-Trump rally drew hundreds of trucks full of supporters into the city. At times, Trump supporters and counterprotesters clashed on the streets, with people shooting paintball guns from the beds of pickup trucks and protesters throwing objects back at them.

A video that purports to be of the shooting, taken from the far side of the street, showed a small group of people in the road outside what appears to be a parking garage. Gunfire erupts, and a man collapses in the street.

The man who was shot and killed was wearing a hat with the insignia of Patriot Prayer, a far-right group based in Portland that has clashed with protesters in the past.

The Portland Police Bureau said that officers heard reports of gunfire shortly before 9 p.m. and found a victim with a gunshot wound to the chest. It was determined that the victim had died. They did not release any information about a possible gunman.

At the scene, police officers blocked off the road and medics attended to a person who appeared to have a chest wound.

“Next to the body was camouflage gear with infidel and thin blue line patches, which commonly indicate support for law enforcement,” The Oregonian reported.

“A photo from the scene published by Getty Images showed the person wearing a hat with a Patriot Prayer logo.”

“Just heard that the man killed is affiliated with my group,” Andrew “Black Rebel” Duncomb tweeted. “Just had drinks with him last Saturday.”

Just heard that the man killed is affiliated with my group. Just had drinks with him last Saturday.

Here’s video from the scene:

BREAKING: A person was shot in the chest in downtown Portland. Unknown if related to antifa/BLM vs Trump caravan clashes. Unconfirmed if person is dead. pic.twitter.com/hS7im5Umlt

The shooting was captured on video:

Clearest and closest or enhanced video of the #Portland shooting.. 👀👀 pic.twitter.com/eKs1qp38cm

(Real) Medics tried to save the shooting victim in downtown Portland. It is a white male contrary to what antifa journalists and accounts said about it being a black victim. pic.twitter.com/jzE2ffqN73

“After finding out that it was a ‘blue lives matter’ supporter who was killed, antifa in Portland are very happy,” Andy Ngo tweeted. “They’re dancing and chanting now.”

After finding out that it was a "blue lives matter" supporter who was killed, antifa in Portland are very happy. They're dancing and chanting now. #PortlandRiots pic.twitter.com/PeqyVUXfNE

“He was a f—ing Nazi! Our community held its own.”

Antifa & BLM in Portland celebrate the homicide of a purported Trump supporter who was affiliated with Patriot Prayer, a Portland-area conservative group. pic.twitter.com/xjIWk0KHN2

The shooting victim in downtown Portland tonight had a side bag with a "blue lives matter" style flag. Many antifa on social media are celebrating his death, even though his ID is not yet known. The shooting suspect is still at-large. pic.twitter.com/1lLxrCl2Uq

People suspect this was the shooter:

This is the purported gunman who shot and killed a Trump supporter in Portland. He is white. pic.twitter.com/TQxraQYPOB

There’s a clearer image of the suspected shooter in this video. It looks like he may be reaching for a gun in his fanny pack.

Was this retaliation for Kyle Rittenhouse defending himself in Kenosha?

Suspect in Murder of Trump Supporter: “I’m 100% Antifa All the Way”