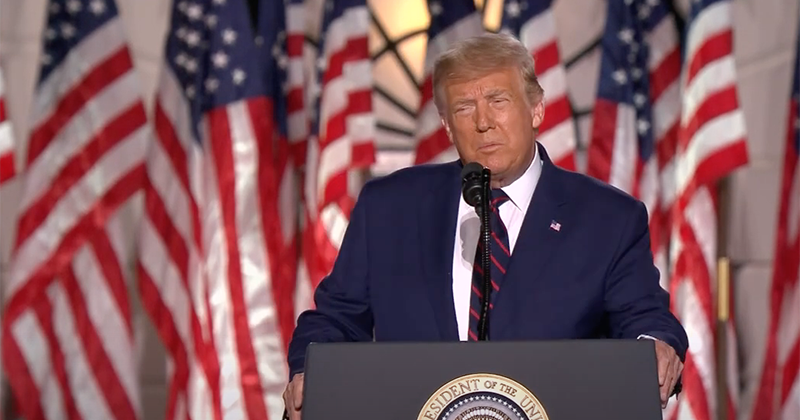 President Trump mocked Joe Biden and the Democrats in his RNC speech last night, saying that it’s ‘too late’ to start finally addressing violence and rioting throughout America’s cities now their ‘poll numbers are going down like a rock’.

“Joe Biden and his supporters remained completely silent about the rioters and criminals spreading mayhem in Democrat-run cities. They never even mentioned it during their entire convention,” Trump urged.

“Now, they’re starting to mention it because their poll numbers are going down like a rock in water,” Trump proclaimed, adding “Too late, Joe.”

Trump continued to slam Democrats’ support of black lives matter agitators, noting that “Joe Biden’s campaign did not condemn it; they donated to it,” citing Biden campaign staff’s donations to the Minnesota Freedom Fund, which was responsible for bailing out arrested rioters.

“At least 13 members of Joe Biden’s campaign staff donated to a fund to bail out vandals, arsonists, anarchists, looters, and rioters from jail,” Trump declared.

The President also addressed the tragic death of retired police Captain David Dorn, who was shot and killed during some of the first riots in St. Louis.

Dorn, who was attempting to fend off looters, was represented at the RNC by his wife, Ann.

“To each of you: we will never forget the heroic legacy of Captain David Dorn,” Trump said.

After avoiding directly addressing rioting in Democratic cities for months, Biden has attempted to turn it around and blame Trump for the unrest, with the leftist media following dutifully in line.

In a CNN interview yesterday, Biden claimed that Trump is “absolutely” rooting for violence on the streets of America.

“He views this as a political benefit to him. He’s rooting for more violence,” Biden later told MSNBC. “He’s encouraging this. He’s not diminishing it at all. This is his America now.”

He also points out that Mike Pence's attacks about violence in "Joe Biden's America" don't make sense because "the problem we have right now is we're in Donald Trump's America." pic.twitter.com/cH74DmBdHB

Biden and the media appear to have cooked up the angle after leftists began to complain that ignoring the unrest altogether was affecting the polls and playing into Trump’s hands.

Democrats need to be extremely concerned about what's happening in Wisconsin, where support for BLM has gone from +25 to +0 in 2 months. https://t.co/2wNMWoW6it

The leftist media quickly began to repeat ad nauseam the talking point that Trump wants the violence to continue, and that this is ‘Trump’s America’:

As usual, this all likely comes too late for Democrats who actually had a chance of winning the election a few months back, but by supporting violent rioters have put Trump firmly in the driving seat:

A few months ago I thought Trump was in trouble, but looking at the polls and anecdotal evidence, it really seems like Democrats' endorsement of BLM could cost them the election. pic.twitter.com/bLgJuzJpP5