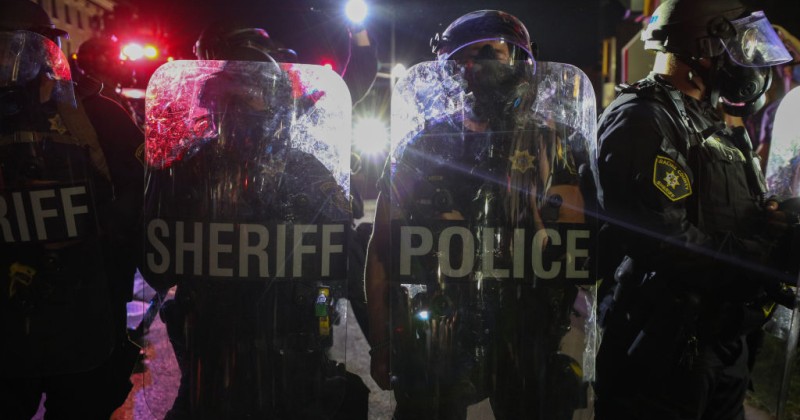 “Call the police” began trending on Twitter after BLM rioters in Kenosha made the plea following a shooting, a massive irony given that Black Lives Matter’s goal is to defund and abolish the police.

Several people were shot last night, including one fatally, as the riots continued to spiral out of control.

One of the shootings happened after rioters attempted to burn down another car dealership and were met by an armed citizen trying to defend the property.

One clip shows a man who has been shot in the head being helped by another individual who screams for someone to “call the police.”

Looters should “call the police” after shooting ! pic.twitter.com/XU3vvCBVQ8

Entrepreneur Michael Coudrey pointed out that the rioters were begging for help from the police a day after they tried to burn down local police precincts.

The shootings also occurred after Gov. Tony Evers refused help from the Trump administration despite law enforcement requesting back up to keep the peace.

Twitter respondents offered little sympathy for those shot given the terror and destruction that Black Lives Matter supporters have inflicted on American cities and those trying to defend their property and businesses over the last three months.

Rioter was just shot in the head tonight in #Kenosha

But weren't you guys trying to defund or abolish them?

Spend months trying to defund and abolish police: Fuck the police, ACAB, etc. Get shot, "SOMEONE CALL THE POLICE."

They are mad as fuck in this tag for people laughing about the irony of it. pic.twitter.com/DvLbLmHdUP

Don't be angry if we mock someone who said Call the Police.

500 businesses have been destroyed. Be mad for them.

"Abolish capitalism" while using capitalist economy products.
"Abolish the police" while calling them if you get shot.

You dropped your 🤡 face.

Antifa: FUCK THE POLICE!!
*dumb fucks gets shot after attacking and chasing someone with a fucking rifle*
Antifa: Call the police!! pic.twitter.com/2hDyMlBnbO

Video: Kenosha Man Punched by Rioter For Trying to Protect His Business From Being Looted