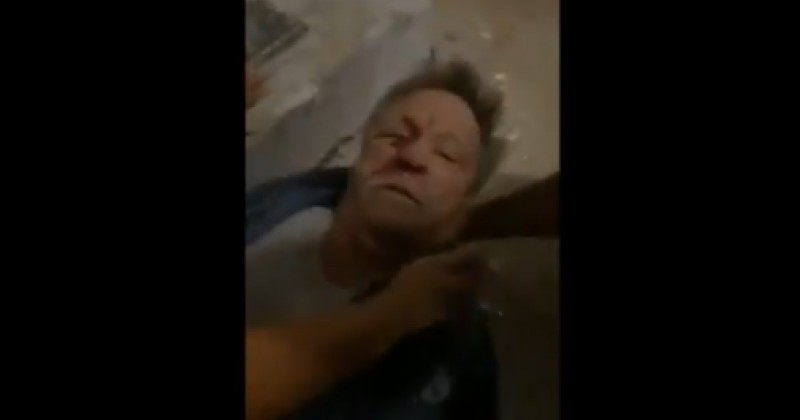 Footage from last night’s riots in Kenosha, Wisconsin shows an elderly man being punched in the face by a rioter as he attempts to protect his business from being looted.

“This poor man got his business caught on fire,” states the woman filming the clip as smoke engulfs the area.

“Dude I’m gonna help this guy, I don’t give a fuck if I get beat up,” she says as the older white man carries a fire extinguisher.

The man then begins using the fire extinguisher to try to disperse looters who are stealing from his business.

A black man then runs up to him from behind and viciously punches him in the head.

The man is then seen bleeding profusely from his nose as he lies on the ground.

“He didn’t deserve any of that, any of it, this is just wrong guys, do you not see this?” asks the woman.

“This is what’s going to happen to every one of you when this goes nationwide,” she tells the rioters.

She is then lectured by a woman about Black Lives Matter as the man continues to bleed.

The condition of the victim is not known, although he did appear to be conscious at the end of the video.

As we highlighted earlier, CBS News described scenes like this, along with innumerable massive fires, looting, physical assaults and general destruction as “peaceful.”

Meanwhile, Reuters reported that “much of the Black business district” was “torched” by the rioters in response to the police shooting of an African-American man.