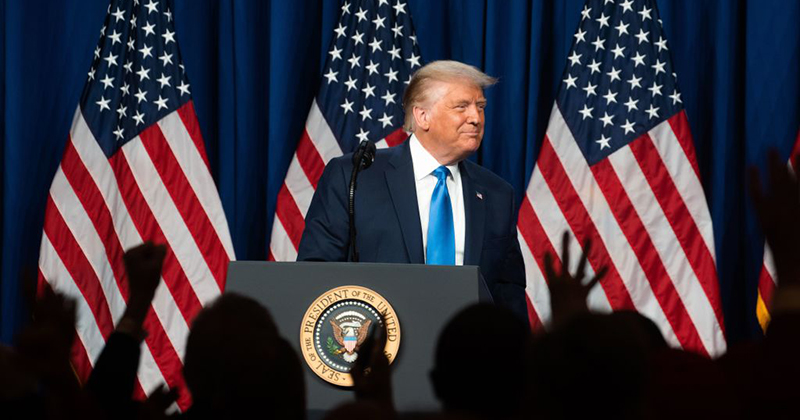 CNN cut out of President Trump’s speech at the RNC Monday and claimed that most of what Trump was saying was “misleading” or “outright lies”.

The network made good on an earlier promise by host Brian Stelter that it would ‘live fact check’ the GOP convention, despite not doing so during the Democratic convention last week.

As the network interrupted Trump, Anderson Cooper explained that they were cutting away because the President was being “negative” despite promising to be “positive.”

Cooper then claimed that Trump made false claims about mail-in voting and lied about Democrats wanting to shut down the country to purposefully disrupt the economy as a way of trying to oust the President from office.

“After vowing to have a positive convention, the president goes negative in its first moments,” Cooper stated, adding that Trump “started off falsely attacking mail-in voting.”

“He also criticized the media for airing the postmaster’s hearing instead of his roll call. He falsely accused Democrats of wanting to shut down the country to hurt the economy and somehow help them at the ballot box. Unclear how angering the entire country by shutting down would help them in the ballot box. He attacked North Carolina’s governor for putting limits on crowds during a convention,” Cooper also stated.

Cooper further claimed “It is sort of all the most recent greatest hits and false statements by the president and I imagine what we’re going to hear a lot this week from the president who clearly wants to be out front every single day.”

CNN talking head John King then complained that Trump’s continued “outright lies” highlight how difficult the job of those at the network is.

King later compared Trump to Pontius Pilate, stating that “He was the disruptive outsider last time, there were all these character questions about him 2016, but … there were enough people in enough places who wanted something different in Washington.”

“They wanted Washington disrupted, they voted for Donald Trump and he got his electoral college victory. Now he is the beleaguered incumbent, and you’re right, he often almost seems like Pontius Pilate,” King added.

During the speech, which other networks broadcast uninterrupted, Trump slammed Democrats for what he described as widespread ballot “harvesting” ahead of the election in November.

Trump claimed that the Democrats are using the United States Postal Service in a “scam” designed to “steal” the election.

“Here is a ballot. What the hell am I going to do with this thing?” Trump said, putting himself in the position of Americans receiving mail in ballots.

“And then they have somebody knocking on your door, and they’re harvesting. ‘Have you gotten your ballot?’ Ya, I have my ballot. Are you going to sign it? If you want. Here it is, get out of here. That’s the honest way of doing it. That’s unfair.” Trump stated.

Trolls immediately claimed that the heckler had yelled ‘monkey’ and that Trump had “relished” in it.

The claim was blatantly ridiculous, and was quickly proven completely false.

Video: Young Leftists Admit Kamala Harris Is Awful, But Say They Will Vote For Her Anyway