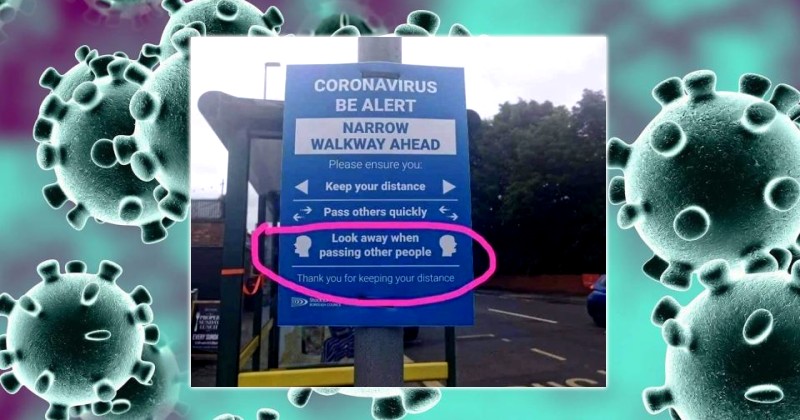 A coronavirus alert sign in the United Kingdom reminding people to maintain social distancing also tells them, “Look away when passing other people.”

The sign was seen in the northern market town of Stockton-on-Tees.

“CORONAVIRUS BE ALERT – NARROW WALKWAY AHEAD. Please ensure you keep your distance, pass others quickly, look away when passing other people.”

The person who originally tweeted the image remarked, “A prime example of psychological warfare and mind control.”

“This official tax-funded placard from Stockton-on-Tees encourages human beings to treat each other as toxic hazards,” tweeted Hitchens.

“Leaving aside the disturbing philosophical and moral implications, surely such behaviour is incompatible with anything resembling a society,” he added.

This official tax-funded placard from Stockton-on-Tees encourages human beings to treat each other as toxic hazards. Leaving aside the disturbing philosophical and moral implications, surely such behaviour is incompatible with anything resembling a society. https://t.co/nDM9nWWE8v

As we previously highlighted, the UK is home to some of the most draconian social distancing rules in the developed world, with one company telling staff that only 40% of them will be able to return to work in January due to a rule that dictates cars must be “socially distanced” in the parking lot.

As we document in the video below, the public’s perception of the threat of coronavirus is infinitely greater than its actual lethality.

A survey revealed in the UK for example that people on average think COVID-19 has killed 7 per cent of the population – around 5 million people.