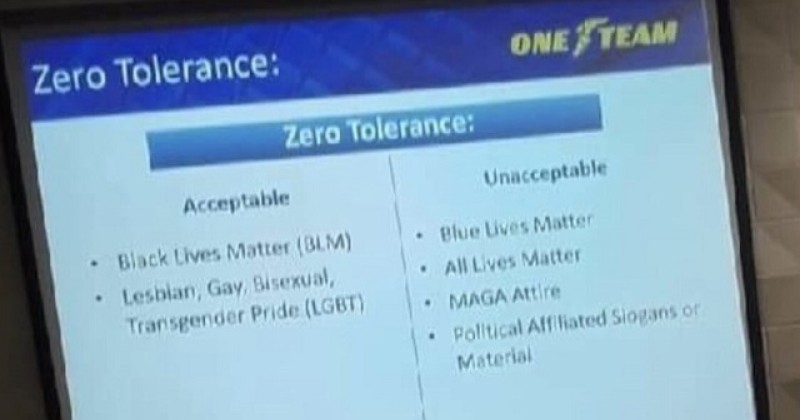 Goodyear is facing calls for a boycott after a slide outlining the company’s “zero-tolerance policy” said Black Lives Matter and LGBT attire was acceptable but that MAGA attire and ‘All Lives Matter’ slogans were not.

The slide was presented during a “diversity training” session at the Topeka plant by an area manager and came straight from Goodyear’s corporate office in Akron, Ohio before being leaked on social media.

The slide is headlined “zero tolerance” and makes clear which opinions are allowed and which aren’t.

After the slide was revealed, Goodyear issued the following statement:

“Goodyear is committed to fostering an inclusive and respectful workplace where all of our associates can do their best in a spirit of teamwork. As part of this commitment, we do allow our associates to express their support on racial injustice and other equity issues but ask that they refrain from workplace expressions, verbal or otherwise, in support of political campaigning for any candidate or political party as well as other similar forms of advocacy that fall outside the scope of equity issues.”

It’s an organization that has repeatedly expressed its agenda to destroy capitalism.

“If someone wants to wear a BLM shirt in here, then cool. I’m not going to get offended about it,” the employee who leaked the slide told Cleveland 19News.

“But at the same time, if someone’s not going to be able to wear something that is politically based, even in the farthest stretch of the imagination, that’s discriminatory. If we’re talking about equality, then it needs to be equality. If not, it’s discrimination.”

Numerous people took to Twitter to call for a boycott of the company, although Goodyear is just as likely to get a boost in revenue from the free ‘woke’ advertising the controversy will generate.

California Makes It Illegal For Students To Skip Anti-racism Training