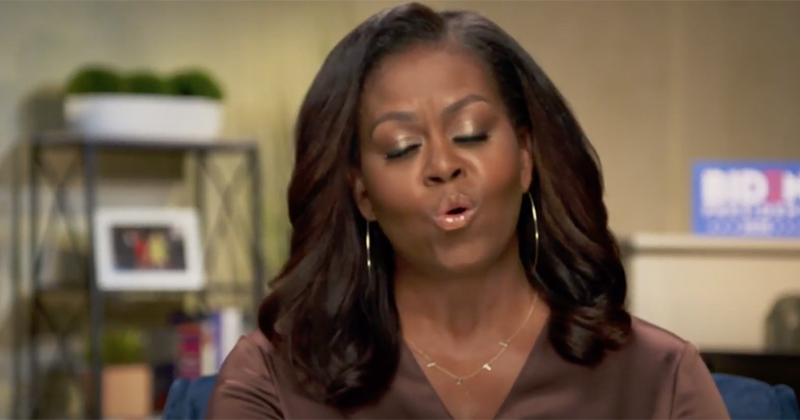 “These are all taped speeches. Michelle Obama, her speech was taped,” Trump said during a campaign speech at the Minneapolis-St. Paul airport.

“You want to go to a snooze?” Trump quipped, adding “You know when you hear a speech is taped, it’s like there’s nothing very exciting about it, right?”

The President also noted that taping a speech isn’t very impressive, stating “I’ll tape my speech, next week … I’ll make sure it’s perfecto, every word will be perfect.”

“Fox will broadcast them more than they broadcast us,” he said, adding “You know that.”

During her speech, Obama said Trump was “in over his head,” urging that “Donald Trump is the wrong president for our country.”

“He cannot meet this moment. He simply cannot be who we need him to be for us.”

The first night of the DNC was widely slammed by those who managed to get through watching it.

No I’m sorry but they did not address racism. They showed a lot of beautiful pictures of POC and made references to BLM, but there was not one mention of an actual policy to help end systemic racism. It’s like binge watching a Marriott commercial.

She also bemoaned the complete lack of policy prescriptions:

Even leftist ‘reporters’ begged for it to stop:

I was just thinking this high energy DNC needed a smooth jazz break.

This convention so far makes me think the Democrats are the party ready to lead America into the '80s.

Someone please talk me off the ledge. I want to win, and the first 22 minutes of this DNC…I'm scared. Can someone tell me how great this is or something?

Rolling Stone writer Matt Taibbi summed it all up with a DNC ‘bingo card’ drinking game:

The rules for tonight's DNC drinking game, as well as the bingo card: https://t.co/vB8sA1VsbJ pic.twitter.com/AHCReSTKJ2

Taibbi asked viewers to “Turn on your TV to CNN or MSNBC right now. The odds aren’t bad – I’d put them at 7-2 – that the word “historic” is in the chyron. You will hear this word five thousand times, at minimum, per day of convention coverage. Out of respect for human life, you’ll therefore be asked to drink to “history” or “historic” only when uttered by actual convention speakers. I hope readers understand, without it being included on the list, that any mention of “Malarkey” is an automatic drink.”