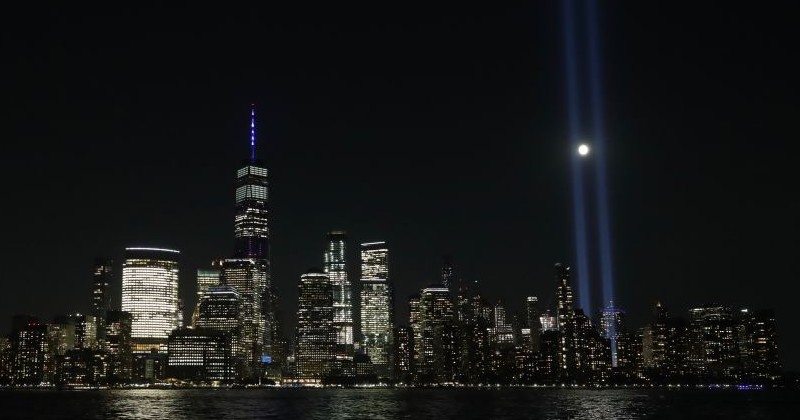 The iconic memorial display in NYC that features two beams of light to honor the victims of 9/11 has been canceled over coronavirus concerns just weeks after Mayor Bill de Blasio allowed a Black Lives Matter mural to be painted outside Trump Tower.

The “Tribute in Light beam won’t shine for the first time in 18 years because health risks posed to the large crew required to oversee it “were far too great,” according to the 9/11 Memorial and Museum.

The same concerns were completely absent when a similarly large crew was on hand to paint the giant Black Lives Matter mural, a process which De Blasio himself took part in for a photo-op.

The mural was also painted without permission from the city, with de Blasio allowing activists to skip the permit process.

As we previously highlighted, at a time when NYC is experiencing soaring shootings and violent crimes (partly thanks to de Blasio emptying the prisons), the BLM mural also required 27 cops working in shifts to protect it.

The 9/11 Memorial and Museum also scrapped the in-person reading of 9/11 victims’ names at the annual Ground Zero ceremony over coronavirus concerns.

Similar concerns were not expressed when tens of thousands of Black Lives Matter protesters repeatedly marched through New York City in close proximity.

Twitter respondents expressed their disgust at the double standard.

“This is a slap in the face to America,” said one.

“No permit but yet arrest people for “vandalizing” what they vandalized in the first place!” added another.

“Remember you can’t get corona at a #BLM event but you can at a light show,” said another.

“Could we just call it the George Floyd Lightshow or something? There’s gotta be a way around this,” joked another.

Lewis Hamilton is an Idiot

Video: BLM Protesters Chant: “Who Do We Protect? Black Criminals!”