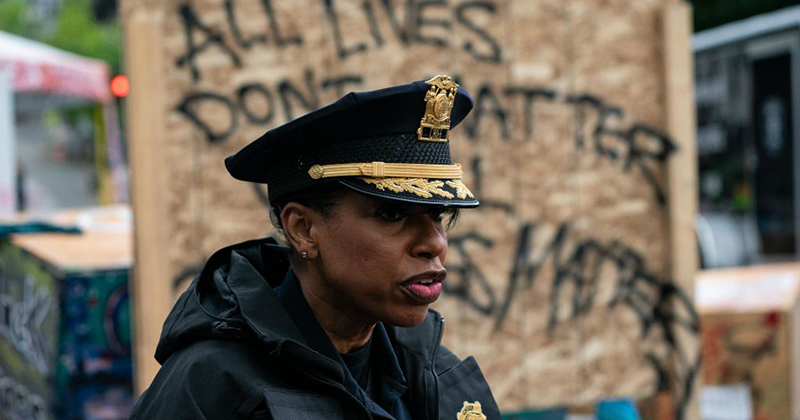 Seattle Police chief Carmen Best has thrown in the towel and resigned after the Democratic city council voted to cut millions from the police department’s budget following demands to defund the police from Antifa rioters and Black Lives Matter agitators.

“This was a difficult decision for me, but when it’s time, it’s time.” Best added.

“Chief Best has been an outspoken critic of the council’s plans to cut SPD’s budget, citing concerns over public safety in a scenario where the department is forced to lose personnel,” KIRO radio reported.

Critics noted that because of BLM, the city’s first black woman police chief is gone:

So… because of the BLM movement that eventually came down to defund the Police led to a strong and successful Black women getting a paycut and having to resign a respected position. 🤔 BLM once again improving the lives of the Black community. ✊🏿

“Know that while I understand the Chief’s reasons, I accepted her decision with a very heavy heart. I have had the privilege to be with Chief Carmen Best in so many situations: with her family, at roll calls, in community meetings, and in nearly weekly meetings addressing public safety in Seattle. Her grit, grace and integrity have inspired me and made our city better. These last months, I knew Chief Best was the person to lead our city through this challenging time, to reimagine policing and community safety. Her leadership is unmatched nationwide, which is why it is a sad day for our City to lose her.”

“Carmen Best is still devoted to this department and our city. I regret deeply that she concluded that the best way to serve the city and help the department was a change in leadership, in the hope that would change the dynamics to move forward with the City Council.” Durkan added.

Best had also been personally targeted by both ‘protesters’ at her home, and the Democrats, with a proposal to cut her pay by 40%:

Chief Carmen Best is the first black woman to lead the @SeattlePD. She is well respected by the rank and file, as well as community leaders. Seattle's political and activist class will have to own this. (END THREAD) pic.twitter.com/ivvHlwLYWz

The move means that approximately 100 police officers, will be laid off.

Reports indicate the specifics of the cuts: