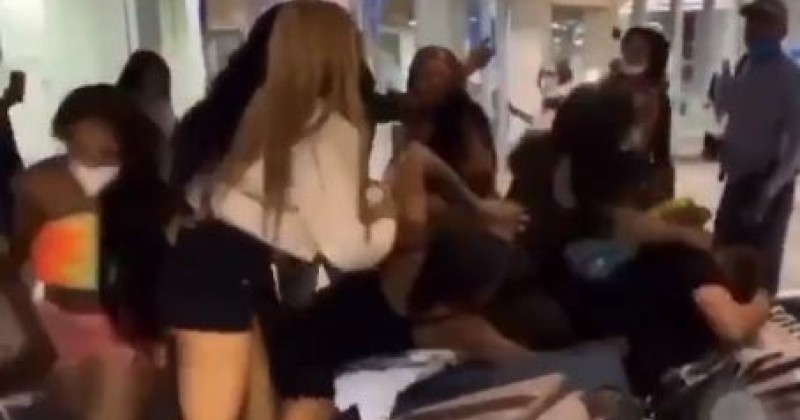 A shocking video filmed inside an airport shows a couple being viciously beaten by a mob as the boyfriend desperately tries to protect his girlfriend.

The video is going viral on Twitter but it has yet to be established at which airport the incident took place.

The clip begins with a young white woman involved in a verbal spat with a group of young black women. The white girl smacks her own backside as the black girls yell violent threats.

The video then cuts to a disturbing scene of the boyfriend on top of the luggage belt desperately trying to shield his girlfriend from an attack as the mob tries to beat her.

The black women punch the young man in the head while trying to drag him away so they can get to the girl.

Respondents pointed out that airport employees appeared to be standing around doing nothing to intervene, with one even stood recording on their phone.

The clip then shows the young man trying to reason with the mob as he stands in front of his girlfriend.

The video ends with the young man lying on the floor trying to protect his girlfriend’s head as the mob reigns down more kicks and punches.

“This is SICK,” tweeted Jessica Fletcher. “Watch the man lay on top of his white girlfriend to protect her from being kicked in the head by a group of black women. I’ve predictably seen no national media cover this.”

This is SICK. Watch the man lay on top of his white girlfriend to protect her from being kicked in the head by a group of black women. I've predictably seen no national media cover this. https://t.co/mjs0cXOcbv

“It’s cowardice. Do not call it otherwise. A man is protecting his woman, NOT hitting his female attackers who are in fact, cowards. the man is a hero putting his body in danger,” said another respondent.

“Always in a pack. It’s always 5 on 1. Just a bunch of cowards,” remarked another.

This is not the only violent incident to have been caught on camera inside an American airport this week.