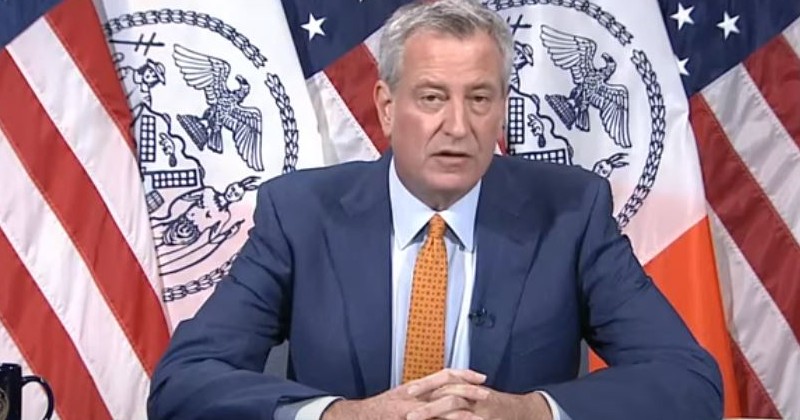 During a news conference, de Blasio claimed that allowing more criminals out on the street actually makes New Yorkers “safer.”

“We now have fewer people in our jails than any time since [World War II], and we are safer and better for it,” he said.

Compared to last year’s figures, shootings in New York this week are up by a jaw-dropping 277 per cent.

Even before the recent riots, major crime in New York City had soared by 22 per cent thanks to bail reforms that allowed suspects to avoid jail and re-offend.

Last month, it was reported that there had been 38 murders over the last 28 days up until June 14, twice as many as the previous year.

On Monday alone, 18 people were shot in 14 separate incidents. Six NYPD officers were also injured during clashes with protesters on the Brooklyn Bridge on Wednesday.

“Recent victims of the crime wave include a 1-year-old shot and killed in Brooklyn on Sunday. Since black lives only matter when they die in confrontations with white police officers, de Blasio must have seen fit to indulge in gallows humor,” writes Dave Blount.

While de Blasio presides over empty prisons and soaring crime having vowed to slash next year’s police budget by $1 billion dollars, he has also assigned no less than 27 cops working in shifts to protect a Black Lives Matter mural outside Trump Tower.

Italian Pedo Cult Tried to Recruit Members of the Elite

Video: Boyfriend Desperately Tries to Protect His Girlfriend as Couple Beaten by Mob Inside Airport