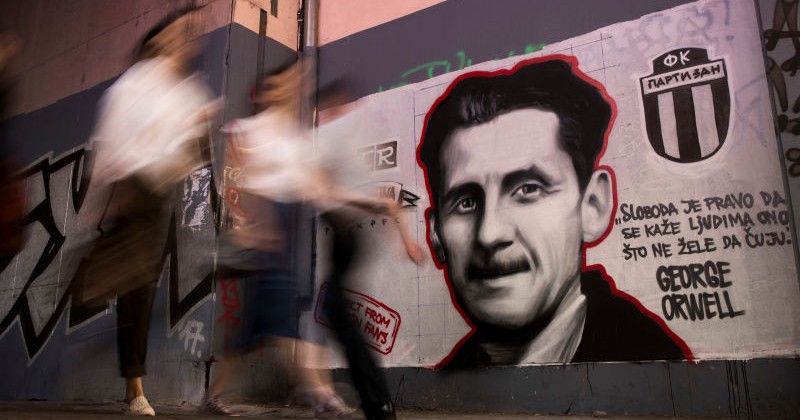 Despite being dead for 70 years, George Orwell may become the latest public figure to be cancelled after a left-wing journalist called him a “vile man” who aided the Nazis with his strident criticism of Stalinist Russia.

“In addition to being a gov snitch, fraud George Orwell spent WWII demonizing the USSR as it defeated Nazism,” tweeted Ben Norman.

In addition to being a gov snitch, fraud George Orwell spent WWII demonizing the USSR as it defeated Nazism

As the Red Army sacrificed millions fighting Hitler, and as the Nazi regime shoved Jews into gas chambers, Orwell was writing Animal Farm

Norton followed up by denouncing the 1984 author as a “reactionary who hated communists more than fascists” before claiming Orwell “didn’t actually believe in free speech. He wanted to take away the free speech of communists. Orwell was a total fraud.”

Respondents pointed out that criticizing Stalinism, which killed multiple times more people than Nazism, doesn’t make one a fascist enabler.

“Orwell cancelled. Stop reading Orwell everybody. There is nothing you are allowed to learn from his books. Ben says,” tweeted Ryan McGoverne.

Orwell cancelled. Stop reading Orwell everybody. There is nothing you are allowed to learn from his books. Ben says. https://t.co/f1GrEoo5Fm

“This is my favourite cancellation yet. Top 10 of the last hour anyway,” said Alex Boyd.

This is my favourite cancellation yet. Top 10 of the last hour anyway.

“To believe this is to be completely ignorant of the history of WWII,” remarked one Twitter user. “Stalin was completely fine with everything Hitler was doing up until the Germans invasion of USSR in 1941. Also the Red Army was not alone in defeating the Nazis.”

Yes, the glorious USSR defeated Hitler, and then promptly brought Stalinism to several European countries, which was just as bad, if not worse, than Hitler's madness.

To be fair to Norman, he does appear to be a supporter of free speech and an opponent of deplatforming.

However, this once again underscores how “cancel culture” is not merely just pushback on opinions considered to be “offensive”.

Orwell died in 1950 and his legacy as an icon of anti-authoritarianism has held firm over the last 70 years.

But just as we have seen with attempts to topple statues of Winston Churchill, George Washington and Thomas Jefferson, the woke mob is so intent on re-writing history and imposing a cultural revolution, not even some of the most seminal names in history are safe.