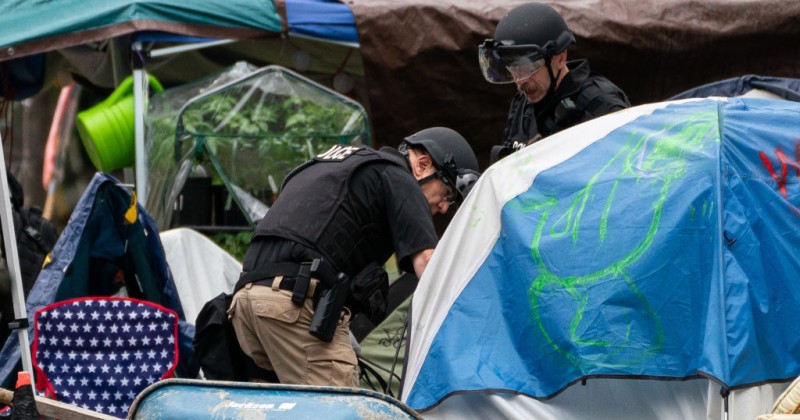 Police dismantled the infamous Seattle CHOP zone seemingly not in response to weeks of lawlessness and violence but in response to a threat made by occupiers to raid Mayor Jenny Durkan’s 5,000 sqft., $7.6 million house.

Durkan originally ordered the area to be dismantled by police over a week ago, but authorities only moved in this morning.

Video clips show a phalanx of armed riot police moving through the downtown area while a few refusniks berate them. The vast majority of occupiers appear to have left before the police arrived.

Shootings, violent crime and rapes have all been soaring in the area, formerly known as CHAZ, ever since left-wing radicals overran a police precinct and occupied the downtown sector.

Despite the media and some politicians claiming that locals supported the autonomous protest, numerous residents went public with fears for their safety and local businesses repeatedly demanded action.

That action arrived not in response to shooting deaths over two consecutive weekends, including the killing of a 16-year-old teenager, but the very day after radicals threatened to march on and potentially raid Mayor Jenny Durkan’s mansion.

“Let’s see: six shootings, two teenage deaths, and @MayorJenny still says “it’s an arts festival”. THEN, the CHAZ threatens to take over her 5,000 sq ft house worth $7.6 million after her new addition. A DAY LATER, she brings in the police, “end the chaos!” tweeted hedge fund manager James Altucher.

Let's see: six shootings, two teenage deaths, and @MayorJenny still says "it's an arts festival". THEN, the CHAZ threatens to take over her 5,000 sq ft house worth $7.6 million after her new addition. A DAY LATER, she brings in the police, "end the chaos!" #Leadership #Comedy

Durkan had previously embarrassed herself by proclaiming CHOP to be a “summer of love,” even as videos out of the zone emerged on a daily basis of fights between protesters and dissidents being beaten up or chased out of the area.

She also told Donald Trump in a tweet “Seattle is fine, don’t be so afraid of democracy.”