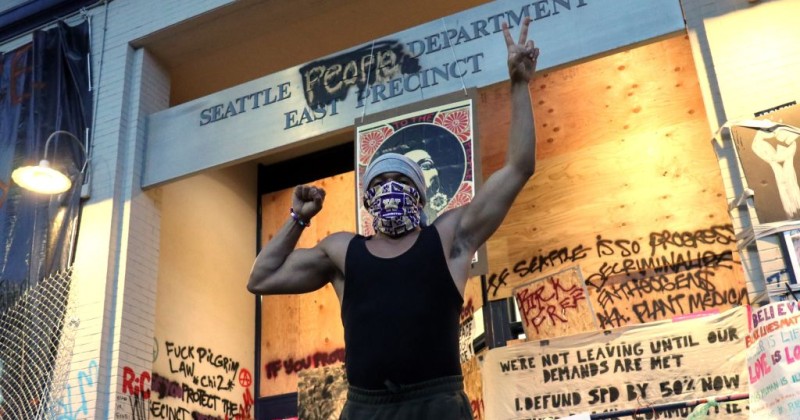 Suggesting that violence has distracted from the movement’s message, Seattle CHOP leaders have told protesters to go home vote for “revolutionary change” by electing Joe Biden.

Far-left Black Lives Matter demonstrators have been occupying the 6 block area of downtown Seattle for weeks, but entirely as predicted it has descended into violent anarchy, with two people being shot in the space of 48 hours over the weekend.

Indications are that the police will return to take back the SPD East Precinct that was ransacked by rioters early next week, prompting CHOP leaders to urge the dispersal.

“The CHOP project is now concluded,” a message posted on the official CHOP Twitter account said. “While we expect a very small handful of holdouts may try to remain in the CHOP no further organizing will be occurring to support this presence and the number on-site will be too small to be more than an annoyance for pedestrians rather than a zonal blockade.”

Andre Taylor, whose brother was killed by Seattle police in 2016, suggested that violence in the area had diluted the message organizers were trying to get across.

“If there was no violence you should’ve stood there for as [long as] you wanted to stay there, but the violence creates a different narrative where the people in authority have to look at it differently,” Taylor told KING-TV.

The message concluded by urging protesters to vote for “revolutionary change” by electing Joe Biden, a strange directive given that Biden is a veteran of the political establishment.

Despite Seattle Mayor Jenny Durkan declaring the occupation to be a “summer of love,” violent crime skyrocketed by 300% and residents reported hearing gunshots and the screams of women likely being raped on a regular basis.

After numerous complaints from locals who said they were living in fear of their safety, Durkan was forced to do a 180 and order cops back in to reclaim control.

CHOP, which always felt like some weird chimera of the Burning Man festival and Charlie Manson’s Spahn Ranch, is over.

In summary, the utopian experiment has once again proved that Communism, on whatever scale it is attempted, always descends into violent mob rule.