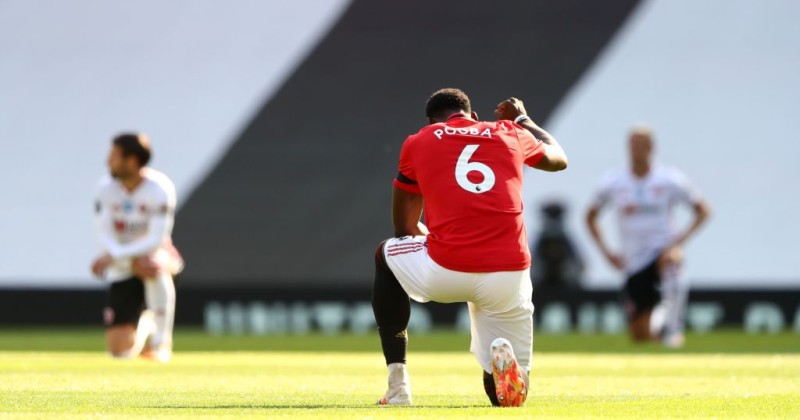 Premier League footballers once again took a knee before today’s games to recognize Black Lives Matter, although there appeared to be no recognition for the three victims who were killed by a terrorist in Reading on Saturday.

Since the resumption of the Premier League season after it was put on hold for coronavirus, before every single game players have took a knee to praise BLM.

This despite the fact that throughout the whole of 2019, only one person of colour was killed by police in the UK, and he was the London Bridge terrorist.

The ‘take a knee’ spectacle appears to be continuing for the rest of the season and will be performed before every game multiple times by every team. Players also have ‘Black Lives Matter’ printed on the back of their shirts.

Despite eleven games having taken place since the stabbing attack in Reading (five of which kicked off this evening), which left three people dead and three injured, there appears to have been zero recognition of their deaths by the Premier League whatsoever.

Manchester Utd and Sheffield Utd players observed a minute’s silence before their match, but that was for an ex-player who recently died and had nothing to do with the Reading victims.

Apparently, the death of one man at the hands of police 4,000 miles away in a different country requires weeks of remembrance, but the deaths of three UK cities in the UK at the hands of a terrorist doesn’t.

One wonders if that would have been different if the Reading victims, all of whom were gay, were killed by a right-wing extremist.

In reality, they were killed by a Libyan refugee who was staying in the country as an asylum seeker.

And maybe that tells you everything.