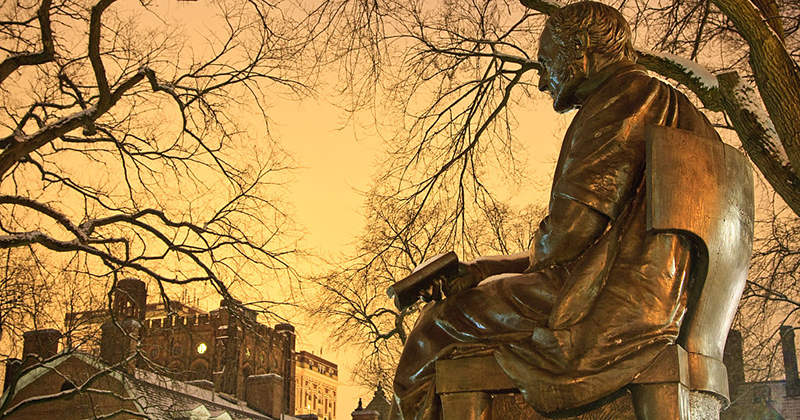 Yale could be the latest institution to be targeted by the woke mob for cancellation, after it was noted that the University’s founder Elihu Yale was a successful slave trader.

Ironically, it appears that ‘cancel Yale’ is gaining traction because a conservative activist, who has campaigned against leftist university brainwashing in America.

REMINDER: At this very moment, @Yale is still displaying the likeness of Elihu Yale. Elihu literally tortured and killed Black people for the color of their skin as he trafficked them across the Atlantic and into a life of slavery. #CancelYale #BlackLivesMatter https://t.co/uKUEI4b7IQ

My life goal is to burn the American university system to ash for what it’s done to the minds of this generation. And salt the ground on which it stood. https://t.co/JwXR2eRQPZ

I am calling on both parties in Congress to pass the Strip University Credentials Act for every American university like Yale, Georgetown, and Brown who are founded by slave owners. I’m calling it the SUC Act.

End university racism and these monuments to slavery. #SucAct

ATTENTION: The @Yale Center for British Art is currently displaying this painting of Elihu Yale, prominent slave trader. Yale hates black people and thinks they should be traded as commodities. #CancelYale pic.twitter.com/sYa2AvvI0u

Paul, why did you attend Yale University when it’s named after a prominent slave trader? Do you now or have you ever believed black people are commodities? How many Black people have you apologized to for attending @Yale? Don’t be racist. #CancelYale https://t.co/KCxCWBIOWQ

Conservatives are using the Yale example to point out the hypocrisy:

I am literally shaking at this roster of racist monsters who proudly and publicly declare their complicity in Yale’s legacy of racism and slavery.

Our entire world is stupid. And if we are removing Teddy Roosevelt, probably the founder of the environmentalist movement, let’s add Yale to the list. #CancelYale https://t.co/L2oo51woYf

Please lend your voice in calling for removal of this disgusting legacy Ivy League (7/8 founded by slavers); Land Grant Colleges (land stolen from indigenous peoples.. Crickets from their presidents hiding under desks or in The Vineyard. #CancelYale

This 👇 idea I actually like. I denounced this movement as misguided, yesterday. But I like hypocrisy as much as the next guy. I'm jumping on this bandwagon. #CancelYale https://t.co/20RAjI4Zte

@Yale University was named for Elihu Yale. Not just a man who had slaves. An actual slave trader. I call on to change it’s name immediately and strip the name of Yale from every building, piece of paper, and merchandise. Otherwise, they hate black people. #CancelYale pic.twitter.com/38cf9bIJNx

If you have a degree from Yale on your wall, it might as well be a confederate cooler in your boat. You racist. #CancelYale

For those calling #CancelYale a troll

How do you *not* rename a university named after a slave trader, Elihu Yale?

Some leftists are very confused though:

guy who doesnt do shit complains about the wrong shit being done#cancelYale https://t.co/16cclaLPF4

This is dripping with sarcasm. He’s not serious.

Pretty sure you don’t understand how sarcasm works. Jesse’s goal here is to “expose hypocrisy” – expecting to own Libs as they clutch their pearls and shriek ‘not our precious Yale!’ On the contrary, Jesse has just made himself look foolish through his own hypocrisy. #CancelYale

Yale astronomy professors expressed doubts that “deeply entrenched systemic racism” existed in their department — by pointing to their hiring of a single Black employee in 1985https://t.co/yrgveXcWPe

The #CancelYale campaign is yet another example of conservatives appealing to leftist standards in their cancel attempts. It doesn't counter leftist principles or advance the conservative cause–it just reinforces the Left's moral power

Wow, the #CancelYale tag is a fascinating convergence of right-wing trolling (Ann Coulter & Co. pointing out that Yale is named after a slave trader & should scrub its name) & leftists who agree

Left Now Calls For Statues of JESUS, Churches To Be Destroyed

“Smart people use that pejorative, ‘Oh these alt-right people’.” 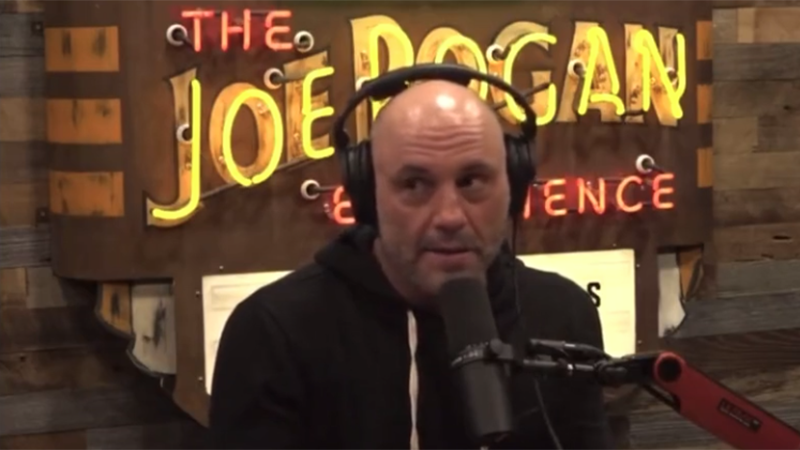 Joe Rogan detailed on his podcast Thursday how the left has become so intolerant of any other viewpoint that anyone who isn’t in total agreement with them is now automatically slapped with the pejorative ‘alt-right’.

“I’m like, stop! You’re talking about people that aren’t even remotely alt right, like don’t do that,” Rogan continued.

Lindsay provided an example in journalist Tim Pool, noting “Just the other day here on the show you had, ‘Tim Pool’s alt-right or whatever’,” referring to comments about Pool by an Australian journalist on Rogan’s show over Pool’s criticism of strict restrictions enforced by the Australian government.

“You’re not convincing me by telling me that people like Maajid Nawaz are alt-right,” Rogan noted, adding a further example, and asserting “That is f*cking nonsense. That’s so dumb.”

“It’s so crazy to call him alt-right, and to call Tim Pool alt-right as well,” Rogan continued, noting “Tim, if anything, he’s a centrist. He was a boots on the ground journalist for VICE…he was all up in Occupy.”

“I know Tim very well,” Rogan continued, adding “He’s not alt-right at all, but he’ll entertain a conversation with anybody… he had [James] O’Keefe from Project Veritas on the other day, and that’s like–that guy’s the boogey man to the left. Even if what he’s saying is a f*cking threat.”

Elsewhere during the podcast, Lindsay drew parallels between Marxist indoctrination in American schools and the Chinese Cultural Revolution, noting “the goal is to destabilise the kids’ identity so they are groomable… and then they look at their parents’ generation and say ‘that doesn’t; represent me, we need something different.”

Lindsay continued, “It’s to cut the tie between the continuity of culture up to that point, including the family, and to start a whole new culture afterwards.”

Handout advises teachers to ask kindergarteners for “name and pronouns” 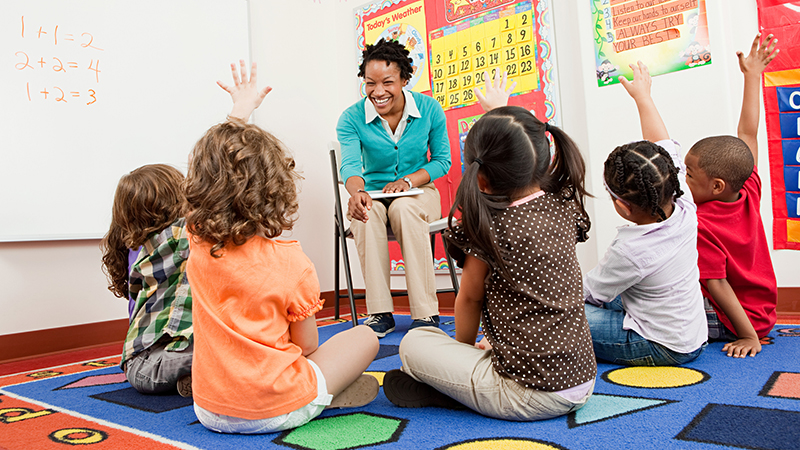 Parents watchdog group Parents Defending Education (PDE) has warned that a school district in Minnesota is pushing transgender and “pride” books and materials on to children as young as three years old.

The group warns that Saint Paul Public Schools is allowing two separate organisations, called AMAZE and OutFront Minnesota, to push the materials in their schools.

The PDE shared a document that shows books titled “When Aidan Became a Brother,” (image below) “I Love My Colorful Nails” and “My Princess Boy” being given to pre-schoolers.

The books are all about young boys and girls transitioning or having feeling that they are different to their biological gender.

A further handout (image below) advises teachers to “Ask Students for Name and Pronouns” and to “Refer students to the Name/Gender Change Request Form.”

In addition, OutFront Minnesota’s website is promoting schemes that provide free “chest binders” for “folks 24 and under” or for “any trans person who needs one and cannot afford or safely obtain one.”

Erika Sanzi, director of outreach for PDE stated that “It is especially egregious that after more than a year of disruptions and closures, the district is pushing ideologically driven content and resources on students and families.”

“It is one thing to treat all students with the dignity they deserve; it is quite another to be so far out of your lane that you are partnering with outside organizations that think it is appropriate to engage toddlers in conversations about gender identity and sexual orientation,” Sanzi added.

“How can a school district even defend spending time and money on this ideological garbage when 2/3 of their students can’t read on grade level and 80 percent aren’t proficient in math?” the PDE director urged.

As we have previously noted, the so called ‘Social Emotional Learning’ agenda is obsessed with encouraging kids that it is normal to have and to openly discuss mental health illnesses and to feel like they were born as the wrong gender.

Concerned parents across the country have slammed school officials for “promoting suicide” among children by amplifying the agenda.

Parents have also warned that “profiteer consulting groups” are being brought in by schools to replace traditional school counselors, prompting accusations that the SEL programmes have evolved into creepy corporate run indoctrination schemes.

PDE perviously noted that children as young as kindergarten age in other areas, specifically Connecticut, are being forced to learn about ‘social justice standards’ including transgenderism and gender identity.

The troll gets trolled.

YouTuber iDubbbz sneakily tried to do a Louis Theroux-style hit piece on comedy icon Sam Hyde, but only ended up embarrassing himself and then refused to release the footage.