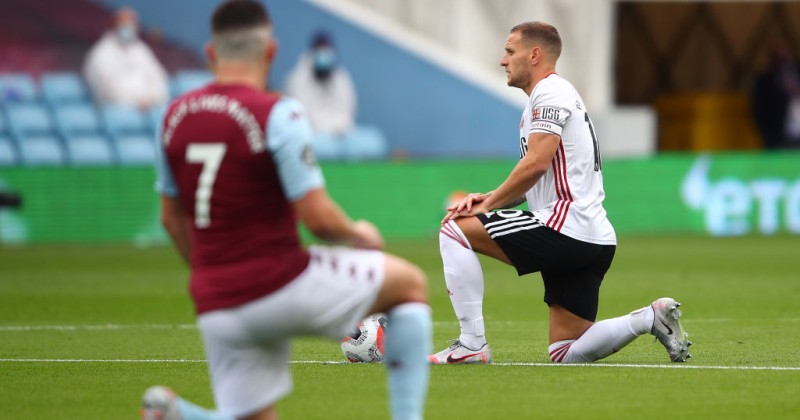 Footballers in the UK’s first Premier League game since the coronavirus lockdown took a knee before kick off, the first of what will undoubtedly by many examples of cringe virtue signaling about a “problem” that literally doesn’t exist.

“After the whistle for kick-off, every player and official inside Villa Park took the knee. Powerful stuff,” tweeted BBC Sport.

After the whistle for kick-off, every player and official inside Villa Park took the knee.

Every single player also now has the words ‘Black Lives Matter’ on the back of their shirt.

However, the vast majority of respondents didn’t agree that it was “powerful stuff,” and instead opined that it was embarrassing.

That is totally embarrassing!!!

Embarrassing stuff. No one take a knee for anyone who isn't the queen

All this for a career criminal drug addict, one that points a gun at a pregnant woman and robs her. What an example they set to the kids watching. Disgusting

When you kneel, double check it's not in front a large open hole they just forced you to dig.

The time for the social engineers to turn the dial up more like. Watch as the sociopaths queue up to virtue signal.

There is no case for the claim that Britain is systemically or institutionally racist. If there was it'd be on the front of every news paper. I have all the data if anyone wants it

The multi-millionaire ball kickers performed the gesture to draw attention to Black Lives Matter despite the fact that there is absolutely no problem with the way police treat black people in the United Kingdom.

The only person of colour to have been killed by UK police in the whole of 2019 was the London Bridge terrorist, Usman Khan.

Perhaps the players should consider drawing attention to a real issue, like black on black knife crime.

According to Metropolitan Police figures, 73 per cent of knife offenders and 53 per cent of victims are from a black or ethnic minority background.

Migrant parents of teenagers in London are choosing to send them back to places like Sierra Leone and Somalia because they say their kids are safer there than living in some areas of London.

As we highlighted earlier this week, some police forces in the UK are being told by superiors to take a knee to placate BLM demonstrators, literally kneeling before a protest movement that incites violence against cops on a routine basis.