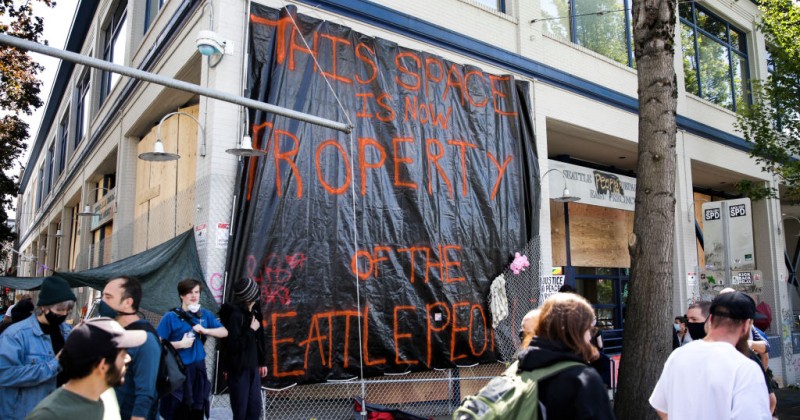 The Mayor of Seattle celebrated a “summer of love” even as rape and violent crime soared in the new “autonomous zone” Communist utopia set up by left-wing extremists in a 6 block area of the city.

The Capitol Hill Autonomous Zone, or CHAZ, is a police-free district of Seattle that has been overrun by Black Lives Matter protesters since Monday.

After the police building was boarded up (with the tacit support of members of the city council), the first thing protesters did was to build a border wall and check the identities of everyone entering and leaving (oh the irony).

Protesters have put on the barricades that those coming into the area are “now leaving the USA” and entering the “Cap Hill autonomous zone” or “Free Capitol Hill.” pic.twitter.com/zGNBYAyLOg

A local SoundCloud rapper called Raz Simone then appointed himself as “warlord” of the area and began making demands of police.

A SoundCloud rapper becoming the warlord in an Antifa insurgency-controlled autonomous zone in Seattle is proof we live in a simulation. pic.twitter.com/E15y65kj7K

Left-wing extremists then complained that homeless people had taken all their food and requested that people make donations of soy food products.

If you're interested in helping those in Seattle's Capitol Hill Autonomous Zone, CHAZ or Gilligan's Island as it's being called, Amazon has a great selection of soy/meat substitutes available.

Seattle Mayor Jenny Durkan then appeared on CNN with Chris Cuomo and declared that the occupation could lead to a “summer of love.”

“How long do you think Seattle and those few blocks looks like this?” Cuomo asked.

“I don’t know. We could have a summer of love!” Durkan responded.

Apparently, this “summer of love” will include rape, robbery and other many other violent crimes.

“Rapes, robberies and all sorts of violent acts have been occurring in the area and we’re not able to get to [them],” warned Seattle’s Police Chief.

Seattle Police Chief: "Rapes, robberies and all sorts of violent acts have been occurring in the area and we're not able to get to [them]." #capitolhillautonomouszone #antifa #BlackLivesMatter pic.twitter.com/Oe5YfVz3uL

Crime in the area has risen 300 per cent since the mob took over and police response times are three times longer than normal.

Those accused of wrongdoing are subjected to immediate mob justice, which in this case included them surrounding and interrogating an accused thief.

My latest report from the “Capitol Hill Autonomous Zone“: Things are getting dangerous for people who are accused of wrongdoing. In one instance, an accused thief was surrounded by a crowd and interrogated, with one person brandishing a bat in his face. https://t.co/NkGWiUXmfa pic.twitter.com/dVLJvTbStG

Looks like their Communist utopia is going exactly as expected!

While President Trump and others have called for the situation to be brought back under control, I say just leave them to it and enjoy watching this ‘destined for success’ experiment unfold naturally.