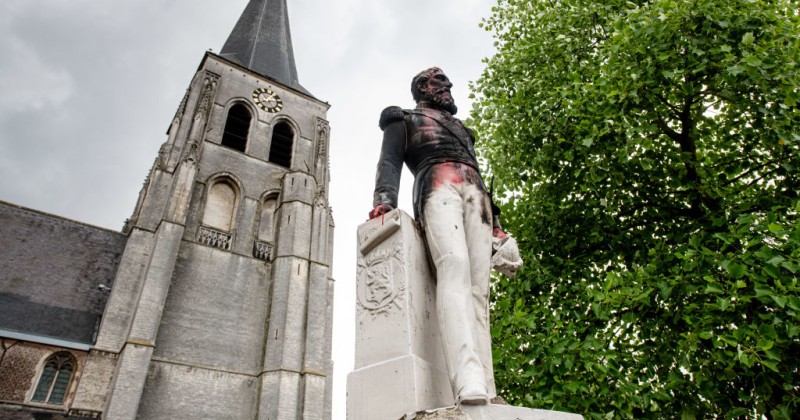 After Black Lives Matter protesters in the Belgian city of Antwerp defaced a statue of King Leopold II, Belgium’s longest-reigning monarch, authorities removed it and said it will be put in a museum.

The statue, which was situated in front of a church, was daubed with paint by demonstrators, prompting its removal by local authorities.

However, according to Johan Vermant, a spokesman for Antwerp’s mayor Bart de Wever, the statue will not be returned to its original position after restoration and will instead likely end up in a museum.

“Because of the renovation work planned for 2023 in the square in which it was placed, the statue will not be replaced. It will probably become part of the museum collection,” said de Wever.

#Antwerp authorities have removed a statue of colonial Belgian King Leopold II after the weekend’s #BlackLivesMatter protest. The campaign to remove all of them continues. #DRC #KingLeopoldII #Belgium pic.twitter.com/7Io5uAfcMK

Numerous other statues of King Leopold II throughout Belgium are now under threat as the mob seeks to erase history on the basis that Leopold was a “colonizer.”

An online petition created by a teenage Congolese migrant calling for all King Leopold II statues to be removed has 60,000 signatures.

Apparently, Belgium is so racist that millions of migrants choose to live there anyway.

53.2 per cent of residents in Antwerp, Belgium’s most populous — are now of immigrant origin.

First it was statues of “slavers,” now it’s longest serving Kings. What’s next?

Given that much of history is now digitized (and therefore prone to “woke” revisionism), don’t be surprised if the mob starts burning books and museums next.

Lefty academics and historians will applaud this as a courageous act of progressivism.