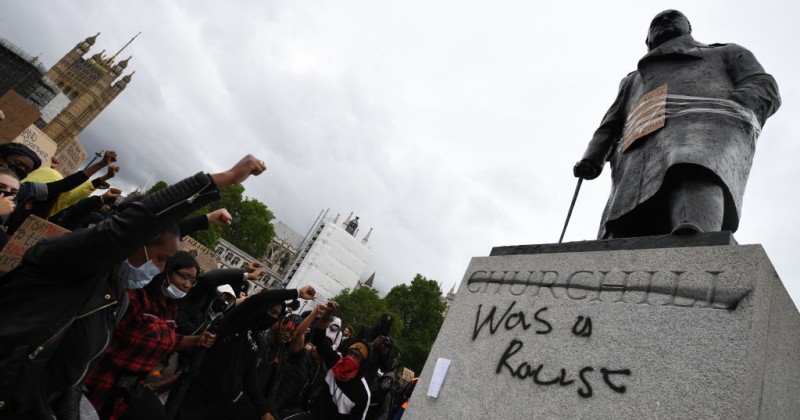 Video footage out of London shows how the police deliberately removed a group of young men protecting the statue of Winston Churchill, allowing it to be defaced by the mob.

The statue of Britain’s iconic war leader was vandalized by Black Lives Matter thugs yesterday, with Churchill’s name crossed out and replaced with graffiti that read “was a racist.”

Video footage shows that a group of young men arrived before the statue was defaced to form a protective circle around it.

Some guys have turned up to protect the Winston Churchill statue themselves – as the #BlackLivesMattter crowd pass Parliament Square and head up to Downing Street again @LBC pic.twitter.com/L5u5OLmtJ3

“Protesters” reacted by chanting that Churchill was racist.

A couple of hours later, the men protecting the statue were seen being deliberately removed by police.

Police remove those guarding Churchill's statue. It was then defacedpic.twitter.com/4JZ0nVsYJJ

Within an hour, the statue had been vandalized by the mob, with police doing nothing to intervene.

The statue was just cleaned and has been re-defaced. People saying “fuck Churchill” #blacklivesmatttersuk pic.twitter.com/YzOaSXC5BN

Later in the day, a man wearing a flat cap walked up to the statue and removed BLM signs that had been placed there.

Man removes some of the defacement from Churchill’s statue; UK police are after him like a shot. pic.twitter.com/FKLv9MqZrQ

He was then targeted by the mob, who screeched “racist,” and the police immediately began following him, presumably to remove him from the area.

This all happened despite the fact that numerous police officers were chased, had objects thrown at them and were attacked by the mob throughout the evening.

Where are the riot police? Cops being chased away by the mob in a nation's capital. This should only happen in a 3rd world country.pic.twitter.com/0Xp4rZM1pE

It’s starting to lose control here on Whitehall as police are attacked with bottles, traffic cones and other objects.

Meanwhile, in Bristol another statue was pulled down and dumped in the river by a screeching mob of primarily white middle class people.

Police later said they made a “tactical decision” to allow the mob to take it down.

Bristol Police not intervening in statue being pulled down ‘tactical decision’ as it risked ‘further disorder’.

So if you threaten a big enough disorder you can do what you want now?

Another protester in London also tried to set the British flag on fire.

Soros And The Secret Origins Of Black Lives Matter