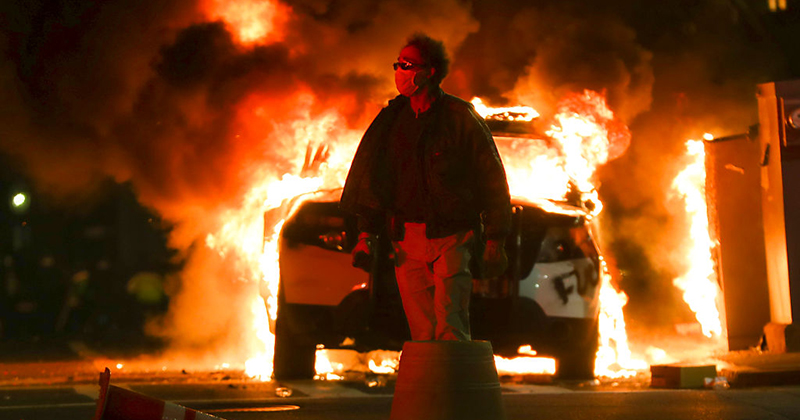 In a now deleted tweet, Democrats in Virginia defended violence being carried out by so called ‘protesters’, and announced that “Riots are an integral part of this country’s march towards progress.”

The tweet by the Fairfax County Democratic Committee cited a previous reference by Barack Obama to the Stonewall riots of 1969 during his second inauguration speech.

Obama said “We, the people, declare today that the most evident of truths –- that all of us are created equal –- is the star that guides us still; just as it guided our forebears through Seneca Falls, and Selma, and Stonewall.”

In context, it’s clear that Obama was not advocating rioting. Indeed, just days ago he issued a statement condemning the current spate of looting and violence.

The family of George Floyd has also pleaded for rioting to stop:

George Floyd’s family has explicitly called for an end to looting and violence, yet blue check marks on here (some of them journalists and academics) are still advocating it.

Almost like this is nothing to do with what happened to Floyd.https://t.co/rwhRd1ee1b

So how many other Democrats believe that rioting and looting is ‘a march toward progress’?

On Monday, President Trump issued a stark warning to Democratic governors that if they act ‘weak’ and do not act to stop the violence he will step in and mobilise all federal and military personnel at his disposal.

The White House has said that Trump is considering invoking the Insurrection Act to deal with the violence. However, it’s more likely that the shows of force seen in Washington DC Monday night will be repeated elsewhere.

General Milley, chairman of the joint chiefs of staff, walking the streets of Washington DC right now. Briefly spoke to say he is observing the situation. pic.twitter.com/fHcYOTYMzN

Helicopter parked over a crowd at 5/E St Nw #WashingtonDCProtest trying to force ppl away with noise and wind pic.twitter.com/x0AcC3ob0S

Hundreds of law enforcement are herding remaining protesters — many trying to smash things as they go — by every means possible: on foot, on bikes, in cars, with flash grenades, in the circling helicopter.

Pandemonium as small bands split apart being tracked across the city pic.twitter.com/3QiCfg3GOu

Things are growing unruly downtown. People are smashing windows with rocks and baseball bats. The helicopter is circling ever closer overhead. Police are throwing flash grenades to force the group in certain directions.

Helicopter just flew extremely low over remaining protesters in D.C. Right after some knocked in a few shop windows and window of cop car.

Terrifying & impossible to keep eyes open — too much debris whipped around. People scattering in all directions. pic.twitter.com/Ww8y1mK0zg

Tense situation on Swann Street in DC. Cops surrounded protesters and started firing pepper spray. A resident let more than 100 protesters take shelter in his home. “I’m not letting any of these kids out of my sight,” he told me over the phone. pic.twitter.com/Bk6NOIbAwf

"There's no way for us to get out of this house and not get arrested." Listen to what a woman who sought refuge inside what appears to be the same DC home as the video below tells @jackiebensen @nbcwashington https://t.co/fOnDJxLizw pic.twitter.com/qZDneJTBf3

another neighbor just opened their door and let protestors run in, Police followed them in pic.twitter.com/01StC2m8Sa

A souvenir left on the street, spotted by @nu1wcf : pic.twitter.com/mUg13yVD1H

It is so much calmer and more peaceful in DC tonight relative to the weekend.

The scene right now at 16th and I, 2 blocks from the White House. DC National Guard members are here but essentially no protesters. Very different from the past few nights. pic.twitter.com/1lqoQKRZiU