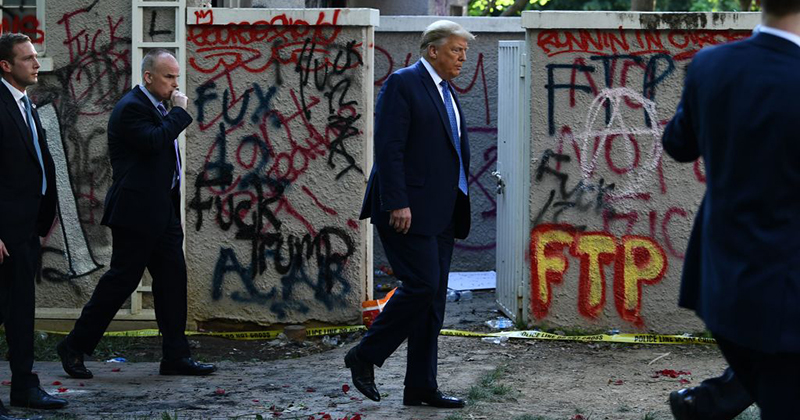 As a third night of rioting, looting and violence broke out across America, leftists and pointless Hollywood celebrities took to Twitter to hyperventilate over President Trump’s use of National Guard troops, and federal police to crack down on protesters in DC, and described his vow to take control in other cities if Democratic governors do not as ‘fascist’.

In addition to more rioting and looting, footage emerged last night of so called ‘protesters’ running through police lines in cars, severely injuring some officers,

I had to trim the video but broooo nights got into the pawn shop n then bruh this is fucking wild pic.twitter.com/mAj02ttIFD

Just happened: a protest in a car run over a group of cops in Buffalo NY…Some of them might be dead

BREAKING: A trooper and an officer were hit by a car that blew through a line of officers at the protest on Bailey Avenue according to PBA President John Evans. They were taken to ECMC. Stay with @SPECNewsBuffalo for updates. #Buffalo pic.twitter.com/odQygo09lH

This activity is literally out of the ISIS playbook, yet Hollywood virtue signalling leftists are outraged at the guard, the police and Trump:

Did we just get Martial Lawed??! So, he just Declared War on The Public??!! It’s not 1807 this is not Rebellion!!, but I think it’s about get all kinds of fucked up here!!

Will Trump be the first President to nuke a U.S. city? Stay tuned.

Trump walked to St. John’s Episcopal Church, which has been damaged by rioters setting a fire, and was photographed in front of it holding a bible. According to reports, ‘protesters’ in the area were told to leave three times, before the area was forcibly cleared by police.

Leftists reacted by declaring that Trump ‘used the military against Americans’ for a photo op:

President Trump just used the force of the military police, secret service, federal police, and DC Metro to move peaceful protesters for a photo op in front of St. John’s Church. Denying Americans their 1st Amendment Rights. We are in a constitutional crisis.

Selling his “faith” like it’s a crappy Trump steak… https://t.co/gfkpp3ZiJD

Trump is a cardboard fake Christian. A Bible photo op and to get the picture he just sprayed peaceful protesters with pepper spray and flash bangs.

And who, exactly, is going to stop him? The Senate? Mitch McConnell? Bill Barr??? The police who have been brutalizing protesters and journalists around the country? The military police who just fired tear gas on peaceful protesters? Genuine question. https://t.co/wxKxcJqTc4

The President had peaceful protesters shot with tear gas and rubber bullets so he could get his picture taken.

The President is a clear, imminent danger to our way of life.

We have never been closer to a dictatorship.

After using flash-grenades, rubber bullets, and tear gas to attack Americans peacefully protesting, the President took up a Bible as though he'd never seen or touched it in his life and posed before a church. As a Christian, I denounce him and his behavior.

The award for most idiotic tweet goes to Bette Midler:

Democrats and fake media seized on the frothing nonsense:

The President of the United States tear-gassed peaceful protestors in order to clear the way for a useless photo-op outside the White House—just after vowing to activate the military against our own people.

Lives and our democracy are in danger.

For our children, for the very soul of our country, we must defeat him. But I mean it when I say this: we can only do it together. https://t.co/G1yE67q9Nz

Tonight the President of the United States used the American military to shoot peaceful protestors with rubber bullets & tear gas them.

For a photo op.

This is a horrifying use of presidential power against our own citizens, & has no place anywhere, let alone in America. Vote.

Tear-gassing peaceful protestors without provocation just so that the President could pose for photos outside a church dishonors every value that faith teaches us.

I think it might have more to do with the fact that peaceful protesters just had rubber bullets and teargas shot at them so the President could have that photo op, but you do you. https://t.co/0X0MjfkSj9

Powerful comment: Bishop Marian Budde of the Episcopal Diocese of DC says she is outraged that @realDonaldTrump used StJohn’s (without asking them) as a backdrop for his photo op after clearing protesters “what we are witnessing now is the shredding of our national fabric” @CNN

Others accused Trump of trying to cause more chaos, and dismissed the notion that ANTIFA is coordinating violence:

The 1806 Inssurrection Act was created to use the military to suppress any insussurrection of slaves. How appropriate this President would create an incendiary moment to incite violence. Once step closer to violent civil unrest, as he flames racial violence.

President @realDonaldTrump is giving the worst speech in the history of our great nation. All while attempting to create deliberate chaos in the streets of our great capital. Devoid of humanity, devoid of compassion, devoid of empathy, devoid of integrity. #VoteOutHate

Trump is politicizing the protests. ANTIFA? Give me a break. Those look like apolitical hooligans and smash-and-grab artists to me.

Others compared Trump and other officials walking past lines of police and national guard to ‘Hitler inspecting his troops’:

Of course Barr was seen walking up and down his line of soldiers. He’s inspecting the troops. Heil Hitman.

I don’t know anyone in “Antifa.” But I’m against facism. And @realDonaldTrump is a fascist.

One wonders how vocal these celebrities would be about ‘peaceful protesters’ if they were outside their luxury mansions smashing down the gates and setting fires while they were still inside.

That was a quick turnaround. pic.twitter.com/LZtQUakVdk

After Trump Vows To Classify It As Terrorist Group, Leftists Defend ANTIFA

You won’t believe how stupid this is.

A road in London called ‘Black Boy Lane’ was renamed because it was “racist,” despite the change being opposed by 100% of black people who lived on the road.

The old name still remains on the sign, and the new name has been crossed out with spray paint.

A stunning victory for women worldwide.

The new owner of Miss Universe celebrated how beauty pageant was now completely run by women.

The owner is a transgender who was born a biological male.

The Color White is Racist

A $1 million+ government-funded study by academics in Norway is investigating how the color white is racist.