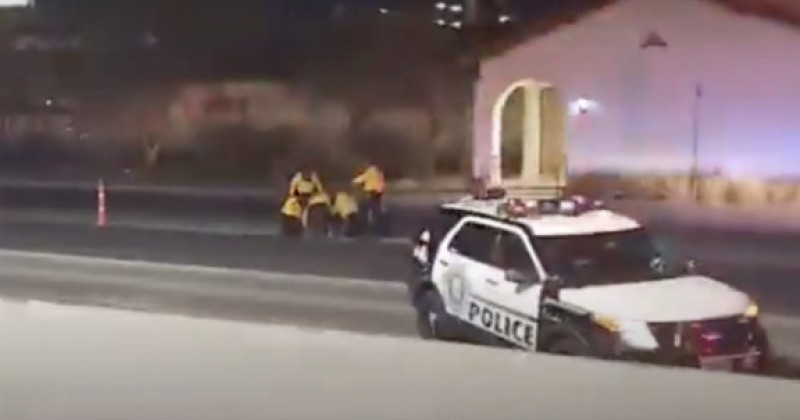 In a night of deadly violence aimed at police officers, a cop in Las Vegas was shot in the head and is now on life support.

Despite George Floyd’s own family calling for an end to violence, multiple cities were again hit by mayhem last night.

A suspect was taken into custody after an LVMPD officer was shot in the head near Circus Circus late last night.

Some of the gunshots can be heard in a livestream from outside the Federal Courthouse at the 02:19:50 mark.

My Office has been notified that the Las Vegas Metropolitan Police Department is currently working two separate incidents in Las Vegas. The State is in contact with local law enforcement and continues to monitor the situation.

“So scary. We need to get out of here … It sounds like a warzone,” says the cameraman as people run in the opposite direction.

Emergency responders are then attending to a man on the ground.

The officer is now on life support at UMC Hospital. According to sources, “the officer was in a fight with another suspect when someone walked up from behind and shot the officer in the head.”

#BREAKING UPDATE: Metro Police sources tell @8NewsNow that a suspect has been taken into custody, regarding the @LVMPD officer who was shot in the head late Monday night near Circus Circus. Again, sources say that officer is currently on life support. #8NN pic.twitter.com/KasbM0FWdT

The incident was by no means the only act of aggression against police officers.

Four officers were injured by gunfire in St. Louis near the police headquarters where cops clashed with rioters all night.

The officers were hit by gunfire after “using multiple flash-bangs and tear-gas rounds against a crowd near Olive and 16th streets.”

There were also at least three vehicle attacks against police officers.

Footage out the Bronx shows a cop flying up in the air as he is hit by a speeding vehicle.

I had to trim the video but broooo nights got into the pawn shop n then bruh this is fucking wild pic.twitter.com/mAj02ttIFD

Another video out of Buffalo shows a driver attempting to plough into police officers blocking a road.

Just happened: a protest in a car run over a group of cops in Buffalo NY…Some of them might be dead

Looters were filmed running over a cop with an SUV in Greenwich Village, New York on early Monday.

This is the THIRD ramming attack caught on tape in NY on Monday. pic.twitter.com/NzOMJxbrkM

Another clip also out of the Bronx shows a police officer being beaten by two men as onlookers celebrate.

NYPD Cop attacked in the Bronx. I guess the critics will now say he overreacted. NYPD Cops defend yourselves, you are alone! pic.twitter.com/424w5bZbC6

Meanwhile, the media continues to describe all this as a “protest.”

“One Of You Shot My Sister”: Protester Killed by Another Protester in Iowa