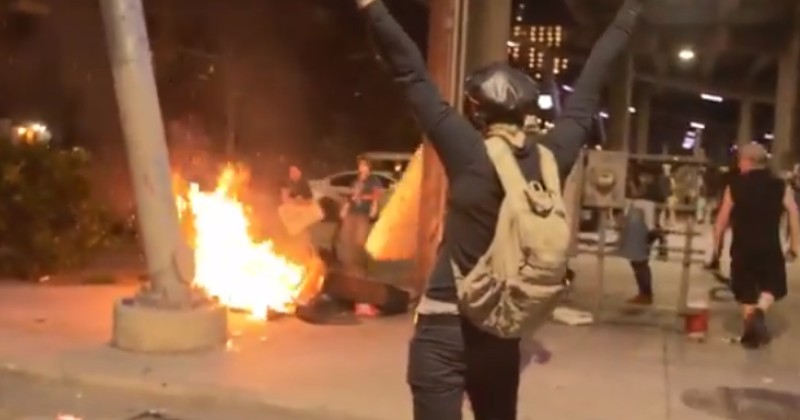 Following an incident in Austin where a homeless veteran’s mattress was set on fire by Antifa rioters, leftists falsely claimed an Infowars film crew filming the scene were responsible for the attack.

Video footage shows the homeless man’s belongings on fire as he desperately tries to put it out while rioters scream in celebration.

“I live here, what the fuck are you doing?” the homeless man yells at Infowars crew.

Rioters cheer as this homeless man’s belongings are set on fire in Austin.

This is heart wrenching. pic.twitter.com/rnafp39w90

Despite the fact that the fire was started by Antifa rioters, ‘Infowars’ began trending on Twitter due to completely false claims that its film crew started the blaze.

The source of the false claim came from a Twitter user called Eldon Katz, who describes himself as an “anti-fascist,” “anti-capitalist.”

An InfoWars crew here in Austin set fire to a homeless man's belongings and shared their despicable act through various social media accounts in an effort to demonize protestors, who I know for a fact would never do this.
Note at the end, he's shouting directly at the cameraman. https://t.co/9f5CojvkhZ

“An InfoWars crew here in Austin set fire to a homeless man’s belongings and shared their despicable act through various social media accounts in an effort to demonize protestors, who I know for a fact would never do this,” claimed Katz.

The tweet has already amassed over 20,000 likes, despite innumerable people in the thread pointing out that the fire was started by rioters.

Contract cameraman Zach said he was filming the incident from around 30 yards away when he saw Antifa members dragging and stacking piles of stuff to set fire to.

People are trying to blame the destruction of the homeless people's property on Infowars.

Here are multiple angles of rioters stealing from and burning the property of the homeless throughout the night and starting fires near their camps. pic.twitter.com/7LnnS7GvBL

The homeless man ran up to his camera because he was one of few people not to immediately flee the scene. Zach didn’t feel the need to flee because he was merely filming the incident and not responsible for the attack.

Zach and his colleague Savannah Hernandez said the incident occurred after they had witnessed Antifa extremists trying to drag people out of their cars and beat them on I-35.

VIDEO: Protesters block traffic, assault peaceful citizen, and attack him when he stumbles for his glasses before valiant reporter @sav_says_ defends him from leftist thugs. pic.twitter.com/L73jZ9daz7

The day before, Antifa rioters attempted to attack an Infowars vehicle in Austin.

Infowars founder Alex Jones said he was planning to file lawsuits immediately unless those responsible for the smear issued retractions.

A GoFundMe has been set up to support the homeless man in the video.

Despite Corporate Virtue Signaling, Nike and Amazon Both Targeted by Rioters