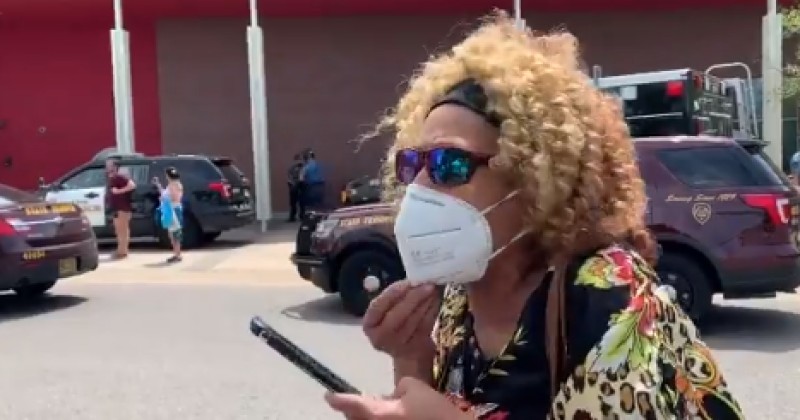 A video clip shows a black woman and former NAACP chapter president trying to collect medication for her daughter outside a Target store in St. Paul telling rioters “these motherf**kers need to go home!”

The twin cities were hit with violent unrest last night as rioters looted stores in response to the police killing of George Floyd.

More looting is already unfolding in both Minneapolis and St. Paul today.

In the clip, the African-American woman says she can’t collect the medication as another person in the background asks, “what does St. Paul got to do with this?”

Diane Binns, 70, of St. Paul is angry at the people here. Binns came here to get medication for her daughter. pic.twitter.com/GA1EJpx4XL

“St. Paul ain’t got shit to do with what happened,” says the woman, adding, “And these people don’t give a damn about George Floyd.”

She notes that the police officers involved in Floyd’s killing have been fired and are under investigation.

“Leave this shit alone – “these motherf**kers need to go home!” she shouts.

Diane Binns was president of the NAACP St. Paul from 2016-2018. She was here for the north Minneapolis riots in the 60s pic.twitter.com/AuuHIdAxZx

The woman subsequently identified herself as Diane Binns, former president of the NAACP St. Paul from 2016-2018.

She says she attended the initial protest against the killing of Floyd but after 30 minutes realized “it was going to be a riot, so I left.”

“I watched what they were live streaming last night on video and the destruction they did to their own community – what are people going to do who live in those communities and need those resources – we don’t have many resources as it is, so why are we going to burn down the small business owners who are there for us?” she asks.

The melee has started here. Things have been heating up here for a while pic.twitter.com/56MiO2ZfWZ

Police have been showing restraint in the face of very antagonistic behavior from the crowd. pic.twitter.com/c2uZjnxKHJ

Rioting in Minneapolis Was So Bad, The Fires Show Up on Air Quality Maps