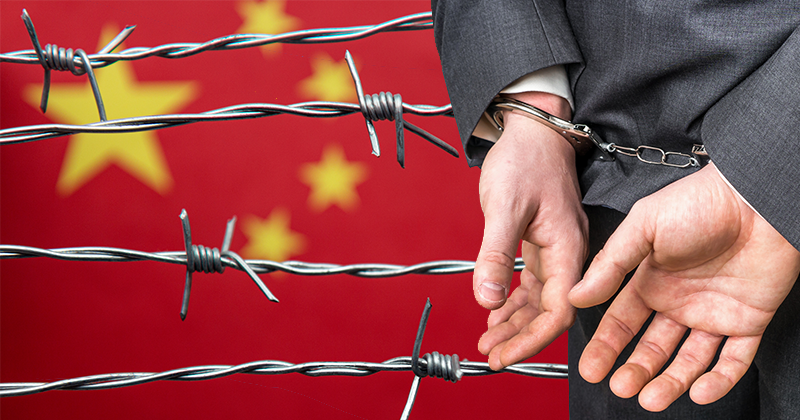 China has arrested and imprisoned hundreds of people for merely discussing the coronavirus outbreak in any context that strays from the communist party narrative on the epidemic, according to a report from a US based Chinese organisation.

Fox News pointed to the report by China Digital Times containing statistics that show between Jan. 1 and April 4, nearly 500 hundred people were arrested and charged, merely for talking about the virus.

The indiscretions levelled at those jailed include criticism of the response to the outbreak by the Chinese government, and questioning the number of deaths.

In some cases, people were arrested for pointing out that the seven funeral homes in Wuhan were overwhelmingly busy.

Others were targeted by the CCP for “referring to someone who has already been censored or arrested.”

In one instance, lawyer Zhang Xuezhong was arrested for suggesting that “the government’s long-term tight control over society and people has almost completely destroyed the organization and self-help capabilities of Chinese society.”

Xuezhong was detained after he wrote that “The best way to fight for freedom of expression is for everyone to speak as if we already have freedom of speech,” in a WeChat post that was seen by the authorities.

The South China Morning Post has since reported that Xuezhong was released after “questioning”, and hasn’t responded to requests for comment about his arrest.

The censorship report also notes how doctors trying to warn the rest of the world about the severity of the outbreak were silenced.

Fox News notes that Dr. Li Wenliang, a 34-year-old ophthalmologist at Wuhan Central Hospital in China’s Hubei Province was “reprimanded by authorities for trying to warn others about the disease in late December.”

“Li was “summoned” by police and forced to sign a letter stating that he made false comments about the virus. His ironic death from the virus at a hospital in Wuhan – where he treated patients and likely contracted the virus – renewed longstanding anger about the communist party’s alleged lies and suppression of information in the country,” the report states.

As we have previously noted, many doctors and researchers were silenced early on during the outbreak by the communist state.

Their warnings could have spared 95% of the globe from the consequences of the virus, according to research.

The censorship report from China Digital Times also notes that “Even entertainment shows that have nothing to do with politics are being rigorously scrutinized and censored for political content.”

While the west is yet to go so far as imprisonment for those questioning the coronavirus fallout, Big tech is actively silencing any dissenting voices on the matter, claiming that questions and theorising on the origins of the outbreak, the motives behind the responses of our governments, and the true scale of the pandemic are all potentially “harmful.”