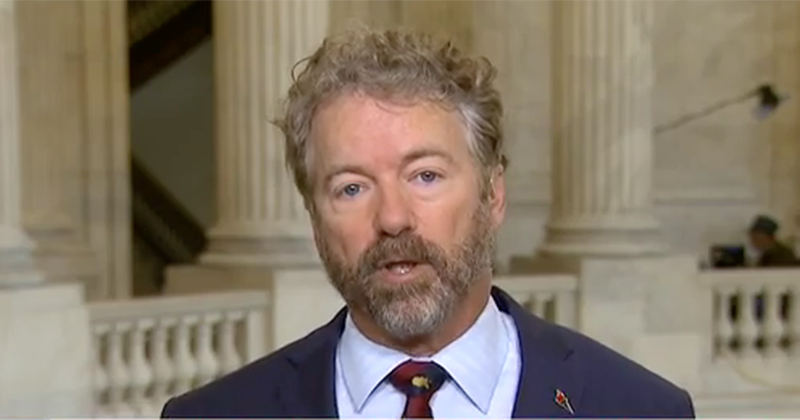 Senator Rand Paul has called for the economy to be reopened, saying that it is the only solution for recovery.

Appearing on Fox News, a bearded Paul said that Americans need to be allowed to go back to work imminently or there will “continue to be economic calamity.”

“To people [who] ask me I remind them that we have no money,” Paul urged.

“We have no rainy day account. We have no savings account. The $3 trillion that we’ve already passed out is imaginary money.” The Senator said, referring to the already staggering national debt.

“It’s being borrowed basically from China. So, the irony is we got the virus from China, and now we are going to be more dependent by borrowing more money from China.” Paul stressed.

“The only thing that recovers our economy is opening the economy.” Paul asserted.

The Senator urged that Americans need to be released from “forcible home arrest” if any recovery is going to stand a chance.

“It’s not a lack of money, it’s a lack of commerce. If you let people have commerce, if you let them trade, if you take them out from forcible home arrest, our economy will recover. But if you keep everybody under home arrest and say you cannot practice your business, you cannot sell your goods, there will continue to be economic calamity. … We don’t have any money.” Paul proclaimed.

Paul also slammed Democratic-run states for wanting to keep the economy shut down.

“All these blue state governors who don’t want to open their state, now they’re clamoring for federal money to bail them out because no state revenue is coming in. We don’t have any money.” he urged.

Elsewhere during the interview, the Senator speculated that Barack Obama criticized a GOP-led investigation into Hunter Biden because he was aware of “corruption problems” while in office.

“There’s been rumors for quite a while that people within the Obama administration knew about the corruption problems with Hunter Biden, that they warned the vice president, and maybe even the president about it.” Paul said.

“I think that there could be a smoking gun, that there’s actually a record of some of these complaints that were going on at the time,” he added.