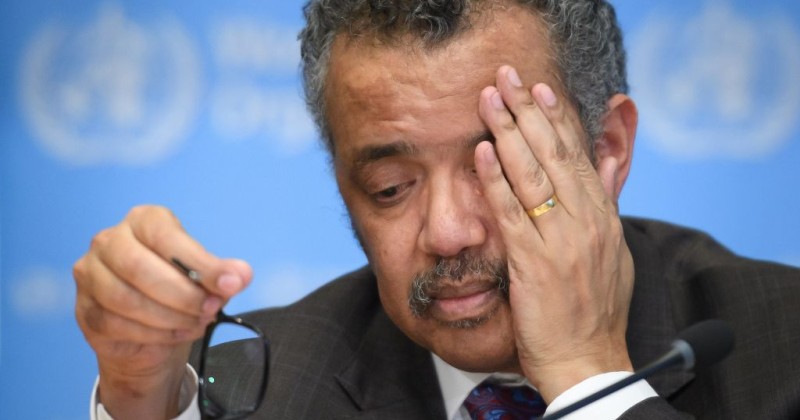 Despite its complicity in helping China cover-up the severity of the coronavirus pandemic, the head of the World Health Organization today claimed “the world should have listened” to the WHO.

Tedros Adhanom Ghebreyesus told a virtual press briefing that the WHO told the world the COVID-19 outbreak constituted a “Public Health Emergency of International Concern” on January 30, when there were only 82 cases registered outside China

“The world should have listened to WHO then carefully,” Ghebreyesus asserted.

The sheer inaccuracy of these statements would be funny if not for the fact that lives were lost due to the WHO’s mishandling of the outbreak.

At every step of the way, the WHO praised China’s actions on coronavirus, despite widespread evidence that the virus was leaked from a lab, that Beijing lied about the true fatality numbers and had known about coronavirus at least weeks before it informed the WHO.

On January 14th, the WHO amplified Chinese government propaganda that there had been no “human to human transmission” of COVID-19, despite this having actually occurred back in November.

According to sources who told Fox News that the virus was leaked from a lab in Wuhan, this represented the “costliest government coverup of all time” and “the World Health Organization (WHO) was complicit from the beginning in helping China cover its tracks.”

The WHO also blocked doctors from urging countries to impose border controls to stop the spread of coronavirus and repeatedly told countries not to close borders, despite this being an effective way of controlling the spread of the virus.

Right up until the end of February, the WHO continued “to advise against the application of travel or trade restrictions to countries experiencing COVID-19 outbreaks,” despite the rapid spread of the disease.

But instead, the WHO insisted that maintaining the globalist principle of the international traffic of people was more important than stopping a global pandemic.

The organization also repeatedly told countries not to profile Chinese people in order to avoid “stigmatization,” something that almost certainly led to a lack of screenings of Chinese people passing through airports.

Given this history, more lives would have been saved if countries had in fact listened to the World Health Organization a lot less.

Howard Stern: Trump Supporters Should All Have a Big Coronavirus Rally, Take Disinfectant and “Drop Dead”

Watch: Bill Gates Defends Communist Chinese Government; Says It ‘Did A Lot Of Things Right’ While US Acted ‘Poorly’