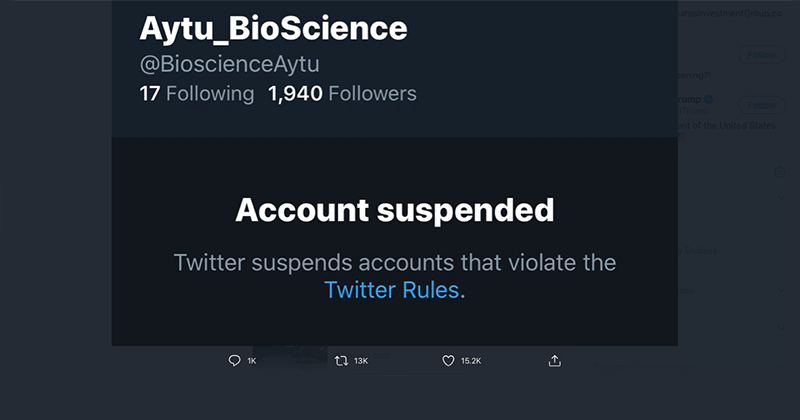 Following in lockstep with YouTube, Twitter suspended the account of a Colorado biotech company which is working to develop a potential coronavirus treatment using UV light inserted into the lungs. It appears that both social media sites have censored the legitimate research purely because President Trump mentioned it.

AYTU BioScience, which is a publicly traded biotech company, has been working with world-renowned research and clinical care organisation Cedars-Sinai to test the revolutionary treatment.

According to a recent press release, Aytu’s “Healight” is a medical device which administers intermittent ultraviolet (UV-A) light inside a patient’s trachea, which has the “potential to positively impact outcomes for critically ill patients infected with coronavirus and severe respiratory infections.”

The Department of Homeland Security’s head of Science and Technology, Bill Bryan, also spoke last week about the potential for the UV light treatment to have a significant affect on viruses such as COVID-19.

When Trump mentioned the research, however, it suddenly became a dangerous unproven risk that needs to be banned, because… Orange man is bad.

UPDATE: @Twitter just suspended the account of the publicly traded biotech company AYTU BioScience that created a novel COVID-19 treatment approach utilizing UV light in the lungs that @realDonaldTrump was talking about.

At time of writing, the account now appears to have been re-instated. However, it is unclear why Twitter suspended it, and what specific rules AYTU violated (aside from the Orange man is bad so everything he mentions must be censored rules).

SCREEEEEEEEEEEE. Orange man said UV light treatment might be good, so it has to be bad. BAN IT.