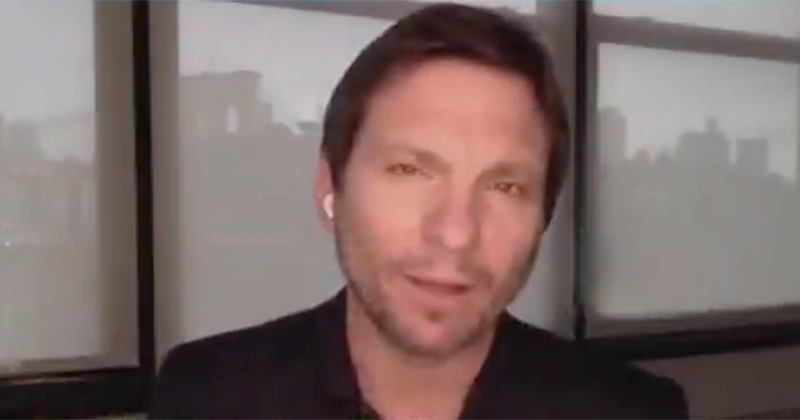 CNN reporter Bill Weir suggested during a report that the pause in industry and transportation due to coronavirus has “helped humanity buy some time” against global warming, a pointless suggestion, even if you believe the most ardent of climate doomsayers.

CNN’s @BillWeirCNN says Coronavirus “has helped humanity buy some time against global warming”; claims the virus came from too much deforestation pic.twitter.com/gfmYcgKrOr

Weir makes the suggestion and asks ‘what’s wrong with that assumption?’, to which climate scientist Jonathan Foley replies that we’d have to keep doing the same thing for 30 years to begin to see the results Weir is suggesting are already happening.

The CNN reporter also seems to suggest in the report that deforestation has caused coronavirus because “virologists warned that an invisible enemy would come out of the jungles” but we kept cutting them down.

“They were right” Weir bizarrely concludes, adding that there’s also an invisible enemy in the skies and the seas that should be taken seriously.

No doubt this clip will be front and centre of the powerpoint presentations of ‘coronavirus is nature’s revenge’ doomers everywhere.

Climate expert AND the world’s most powerful doctor 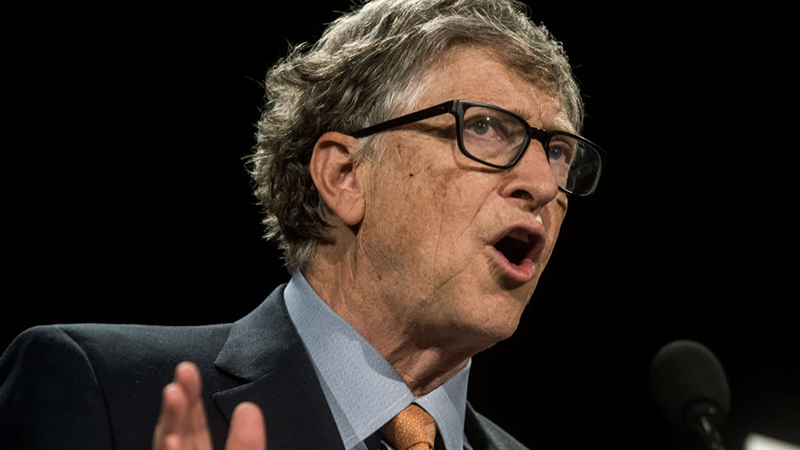 The world’s most powerful doctor Bill Gates is to be given a platform this week to address FORTY heads of state at a climate summit hosted by Joe Biden, according to a Reuters report.

Gates, also a renowned climate expert because he is selling a book about it, will be the keynote speaker at the virtual summit which begins on Thursday and will be attended by French President Emmanuel Macron and British Prime Minister Boris Johnson.

Gates will reportedly talk about “Innovation in clean energy” and “industries that have yet to be created”.

The announcement comes as Democrats reintroduced their revamped ‘green new deal’, which seeks to plough hundreds of billions of dollars into so called ‘green’ initiatives in an effort to transition to a 100 percent carbon free-economy, as well as meeting 100 percent of power demand from zero-emission energy sources like wind and solar.

Critics have warned that it will collapse an already stretched economy while handing government total control over all aspects of society.

Senator Rand Paul also noted that the initiative lays out plans to form a Civilian Climate Corps youth army that will be trained to follow government mandates.

Bill Gates has poured millions into bizarre geoengineerng research into blocking out the Sun, funnelling at least $4.6 million to the lead researcher on SCoPEx, Harvard applied physics scientist David Keith.

Gates was recently lauded as the man to “save the world” and help the planet reach zero carbon emissions in a report by Wired Magazine, despite such standards not being reflected in the billionaire philanthropist’s own lifestyle.

A CO2 super-emitter, Gates owns 4 private jets and a collection of Porsches which are kept in his 66,000 square foot mansion.

Gates is now the biggest owner of farmland in America, according to a Forbes report, all the while lecturing Americans that beef farming is killing the planet. 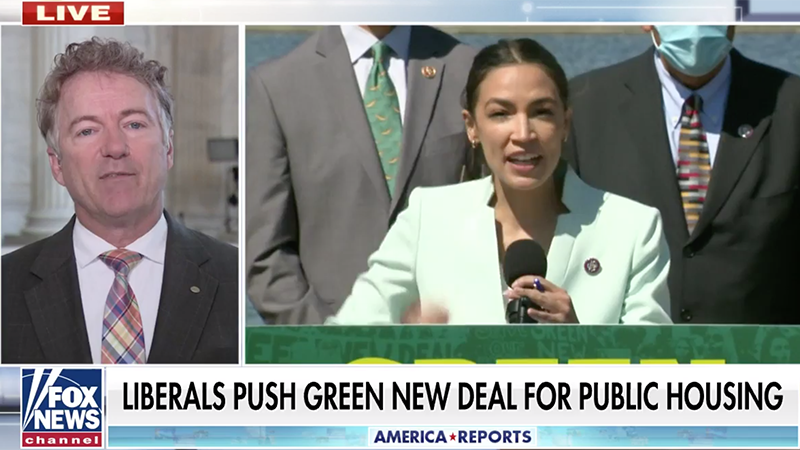 As extreme leftists within the Democratic party formally reintroduced their radical ‘green new deal’ Tuesday, Senator Rand Paul warned that the vast spending plan seeks to overturn the voter economy, do away with free market capitalism, and even create armies of youths dedicated to implementing socialist policy.

Appearing on Fox News, Paul warned that the far left “definitely think that money grows on trees, and I guess that’s part of the green plan.”

While the plan has been touted as a $172 Billion spend, Paul note that “if you add all of it up from the infrastructure bill, it’s actually about $500 billion.”

“There’s $174 billion for weatherising houses, which never gets to energy efficiency, to meet the cost. There’s about $100 billion for electric cars,” Paul also noted.

“There’s $10 billion for some kind of army of climate change people, some kind of climate corps youth which I think has connotations in our history of these sort of government informed youths out there marching for things that the government tells them to do,” the Senator further warned.

The Civilian Climate Corps Act, introduced along with the new deal Tuesday says that a civilian army should exist “to mobilize the next generation of conservation and resilience workers and maximize the creation of accessible training opportunities and good jobs.”

“I think all of it is horrendous but the biggest problem is the financial drain on the future of our country by spending so much money we don’t have,” Paul urged.

Countering the argument made by the likes of Bernie Sanders that the deal will create millions of jobs, Paul emphasised that “building pyramids could create jobs, it’s really should the government be deciding where we use our dollars and where they’re spent and where the jobs are created, or should the market place?”

The Senator continued, “In the market place we vote. So when I go to Walmart or Kroger, I vote on what needs to be produced by buying something. So what is produced and where the jobs are created are what I like to eat or what I like to buy at Walmart, that is the consumer driven capitalist way where we vote in the economy. When government does it, it means I don’t get to vote as a consumer, Bernie Sanders gets to decide it.”

Paul also noted that when it comes to policy that actually has an effect on the carbon footprint, Democrats are opposed.

“One industrial decision has accounted for more reduction in carbon than any other decision in the history of this movement, and that’s fracking,” Paul noted.

“And so they are against the one thing that has reduced the carbon footprint, as we’ve converted to natural gas,” he added.

The plan, being pushed by the likes of Sen. Ed Markey (D-Mass.) and Rep. Alexandria Ocasio-Cortez (D-N.Y.) calls for transitioning to a 100 percent carbon free-economy, as well as meeting 100 percent of power demand from zero-emission energy sources like wind and solar.

Critics have warned that it will collapse an already stretched economy while handing government total control over all aspects of society.

“They would freak out! What are you, nuts? You’re nuts!” 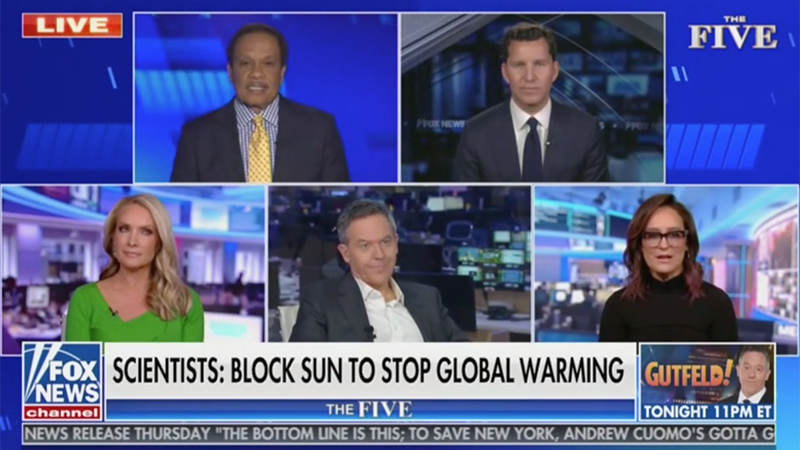 As the likes of the New York Times continue to seriously push calls from Bill Gates funded ‘scientists’ to experiment with dimming The Sun to combat climate change, one commentator asked viewers to imagine the reaction if President Trump had suggested the exact same thing.

Fox News commentator Greg Gutfeld noted that leftists would “freak out” if the scheme had been adopted by Trump.

“I ask you this, what if this had come out of Trump’s mouth in an interview when a reporter says, ‘President Trump, President Trump how would you reduce global warming?’ He’d look at him and he’d go ‘why not block the sun?’ They would freak out! What are you, nuts? You’re nuts!” Gutfeld said.

Gutfeld sarcastically continued, “No, this is actually in The New York Times and they have solar engineers and experts saying, so actually I am behind this 100%. I’m behind it 100%. I can’t wait.”

“I don’t know if it’s that crazy of an idea because you’ve got solar engineers involved and I like engineers, and the thing is it is easier to block the sun than to put sunblock all over the Earth,” he added.

As we reported last week, an effort to dim the sun has been scrapped by the Swedish Space Agency, who announced that the SCoPEx program, funded by Bill Gates, has ‘divided the scientific community’ and will therefore not be carried out.

The idea comes off as a weird vampirish effort to starve the planet of sunlight, the driver of all life, with little scientific logic behind it at all.

Keith told Reuters that it is only “a setback,” however, and suggested the project could move to the US, where the National Academies of Sciences, Engineering and Medicine recently published a report calling for $100-200 million to be pumped into solar geoengineering over the next five years.